Vietnam's White Paper is believed one of the most important official documents on defense and military strategy.

It is an additional element in the White Paper which elaborates on the overall principles and guidelines for protecting the Vietnamese homeland for the next 10 years, representing the flexibility and resilience long embedded in Vietnam’s foreign policy, a Vietnamese research fellow said in an article posted on Washington-based Center for Strategic & International Studies (CSIS)’s Asia Maritime Transparency Initiative.

This element is among the “four-no's and one-depend” policy which has been updated from the “three-nos” stated in the previous White Paper.

The policy means no military alliances, no siding with one country against another, no foreign military bases, and no using force or threatening to use force in international relations; but, “depending on circumstances and specific conditions, Vietnam will consider developing necessary, appropriate defense and military relations with other countries.”

The “one-depend”, in theory, officially and significantly expands the spectrum of strategic choices by giving the military more room to maneuver, especially in handling its relationships with Western militaries, according to Nguyen The Phuong, research associate at the Centre for International Studies, University of Social Sciences and Humanities, Vietnam National University, Ho Chi Minh City.

It is unclear how “one-depend” will ultimately be utilized, the element is certainly a positive sign reflecting the inherently cautious characteristics of Vietnamese military circles, the author added.

The “four-no's and one-depend” also shapes Vietnam’s policy toward the South China Sea disputes where the country’s interests are increasingly threatened by China’s bullying tactics.

Although Vietnam has stood firm and defended the legitimacy of its claims after recent incidents, it cannot stand alone forever in its struggle against China’s coercion.

“Four-no's and one-depend” provides flexibility given a status-quo that is rapidly changing and increasingly unstable as the White Paper recognizes the region as a boiling cauldron where great powers compete for influence, for example, China’s Belt and Road Initiative, the US Free and Open Indo-Pacific Strategy, and India’s Act East policy, among others.

The newest “no” – no use or threatening to use force in international relations – reflects another important principle in Vietnam’s overall defense policy: the self-defensive and peaceful characteristics of its defense strategy.

The White Paper reaffirms the motto of “defending the Homeland from afar,” which includes mobilizing all non-military channels to keep the homeland from being threatened in the first place, the author noted. 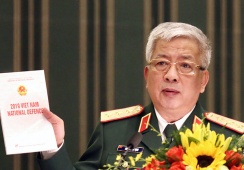 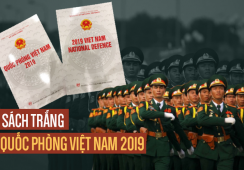