Construction of four Vietnamese airports to begin from late 2022

In order to appeal to investors, appropriate support from the State is needed during the investment and the exploitation.

Vietnam's Deputy Prime Minister Le Van Thanh has requested the host provinces to quickly select investors so that the construction of four airport projects in Sa Pa, Quang Tri, Lai Chau, and Phan Thiet would kick off in late 2022 and early 2023.

Chairing a meeting on airport network development on September 12, Deputy Prime Minister Le Van Thanh said that the mobilization of private resources in airport construction remains slow because investment procedures overlap and are cumbersome, meanwhile, some ministries, branches, and localities have not been proactive in addressing those shortcomings.

“In particular, it is difficult to mobilize investment capital to upgrade and expand the existing airport. Currently, the airport infrastructure assets are managed by different units which makes it hard to conduct tenders to select investors in the form of public-private partnership (PPP),” he underlined.

In fact, investment in the construction of new airports is very capital intensive, while most airports have low capacity and low revenues. The BOT (build-operate-transfer) financing option is often not feasible and the payback period is long (around 47-50 years). Therefore, to be attractive to investors, adequate support from the State is required during the investment stage and the exploitation phase.

According to the planning study, in the 2021-2030 period, Vietnam would have 28 airports, including 14 international ones, and the number would be increased to 31, including 17 domestic airports by 2050.

The Deputy Prime Minister asked to decentralize the preparation of investment procedures with more powers given to the provinces and cities.

He also assigned the Ministry of Transport to coordinate with the provinces and cities to review and adjust the planning and urgently draft investment projects to report to the Prime Minister for approval.

At present, the country is home to 22 civil airports, including 10 international air hubs. Tan Son Nhat in Ho Chi Minh City and Noi Bai in Hanoi are the largest.

Recently, Hanoi authorities proposed to the Ministry of Transport the planning of its second international airport in Thuong Tin, a suburban district south of the capital city. It is part of the plan to build another airport in the city’s southeast in the 2030-2050 period to relieve the pressure on the current Noi Bai International Airport.

This project has many advantages, among them the short distance and the travel time between Thuong Tin and Hanoi’s downtown, convenient road connection between this site and Hanoi’s metropolitan area, and easy access to the location by road, waterway, and railway, according to the city.

The clearance of the 1,300-ha airport construction site (similar to the size of Noi Bai International Airport with a capacity of 50 million passengers per year) is expected to be less troublesome than other public works as the area is mainly farmland.

According to Nguyen Bach Tung, an aviation expert, many cities in the world with populations of 10-15 million have built two international airports, so Hanoi will need another one in the next few years.

An airport in the southern part of the capital city will benefit surrounding localities like Ninh Binh Province, an emerging tourist magnet, he added. 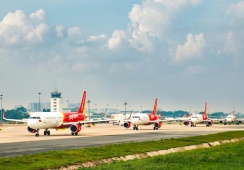 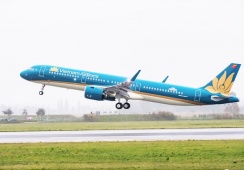