An exhibition themed "Tiger on walking in town" folk painting exhibition is on display at Nam Huong Communal House, Hoan Kiem pedestrian zone in Hanoi from March 23 to June 23.

According to painter Nguyen The Son, curator of the exhibition, the “Tigers walk in town” display shows young artists' efforts to honor the value of Vietnamese folk art.

“Taking the image of a tiger as the main inspiration, the artists used a variety of materials such as gouache, oil on canvas, lacquer, among others to create unique tiger-themed paintings,” he stated.

Tiger is the mascot of the year 2022. It is also considered the most powerful of the 12 animals in Vietnamese culture. “Hopefully the Tiger, with its majestic appearance, will help inspire and ignite the energy of viewers,” he added.

Hang Trong folk prints are the traditional trait of an ancient capital. The seemingly forgotten technique has been awakened recently.

Originally, Hang Trong folk painting uses wood carving technique to print colorful inks on ‘do’ paper (Poonah paper). In making a painting, the craftsman starts with woodblocks to print black outlines, then draws the details, and finally colors the picture by hand.

When approaching Hang Trong folk paintings, young artists not only respect the cultural, artistic and historical values, but insert some creative features into the paintings. They also draw them in the new material of silk or lacquer. Thanks to that, the folk prints began to have a new vitality.

The exhibition is expected to bring young people and the community closer to folk art in particular and values of cultural heritages in general which are in danger of falling into oblivion.

It is believed that the contemporary Hang Trong folk prints will bring a new vivid appearance that would enrich spiritual life of Hanoians as well as Vietnamese people. 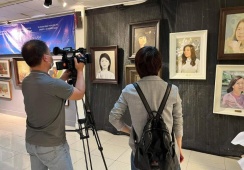 Art exhibition to honor Vietnamese women, the country and love 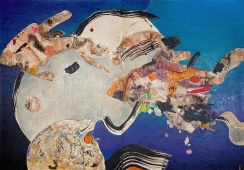