In case Vietnam could put the Covid-19 situation under control, the country’s GDP growth may hit the 6-6.5% target or even higher.

According to Ngan, the country’s bright economic prospects come from stable macro-economic conditions, Vietnam’s growing influence on the global stage, and the signing of 14 free trade agreements (FTA), including those with major economies in the world.

Ngan also stressed the necessity for Vietnam to accelerate public investment as the disbursement rate remains modest at 65% as of present, noting over VND160 trillion (US$7.07 billion) needs to be disbursed to create a driving force for growth in the next phase.

In 2022, Vietnam is set to allocate VND560 trillion ($24.75 billion) in public investment, which Ngan said is both an opportunity and challenge for the economy.

“Resources should be concentrated on projects of high spillover effects for growth,” he noted.

Meanwhile, a GDP growth of 6-6.5% means the country should mobilize over VND3,000 trillion ($132.6 billion) in social investment capital, of which around VND2,000 trillion ($88.4 billion) is expected to come from the business community.

“Enterprises to recover would need to access to a large credit package of the size of VND40-60 trillion ($1.76-2.65 billion) with preferential rates of 2-3% per annum for around two years,” he added, saying the funding could come from the underspent budget.

Sharing Ngan’s view, Deputy Nguyen Thien Nhan from Ho Chi Minh City called for a sizeable stimulus package of 4% of the GDP, or around $13.7 billion, to support growth.

“The capital boost would be significant for major economic hubs such as Hanoi or Ho Chi Minh City, eventually accelerating the overall growth,” Nhan continued.

Deputy and Vice Chairman of the NA Committee for Finance and Budget Nguyen Huu Toan, however, warned the use of stimulus packages may further raise public debt.

Toan noted raising the public debt threshold to 51% of the GDP to aid the economy may result in doubling the total public debt amount during the 2021-2025 period to around VND6,500 trillion ($287.42 billion).

“This puts a huge risk on the national financial security,” Toan said.

“An economic recovery plan is necessary, but the Government should take into account the financial and monetary situation to avoid long-term impacts on sustainable development in the future,” he suggested. 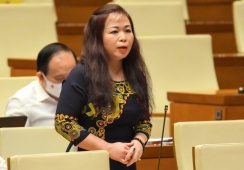 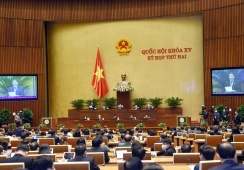