Lying in the Northwestern of Hanoi, Dan Phuong rural district has been known for its rich culture, becoming an appealing rural cultural destination, thanks to its three intangible folk heritages including the kite flying festival in Ba Giang village, ca tru singing in Thuong Mo commune, and cheo tau (rowing singing) at Tan Hoi commune.

A thousand-year-old kite village by the Red River

The tradition of kite making and flying started in Ba Giang Village (or so-called Ba Duong Noi village, Hong Ha commune, Dan Phuong district, Hanoi) over a thousand years ago. Legend has it that after retiring to his village at Ba Giang, Nguyen Ca, a talented general under Dinh Dynasty (968-979) taught people farming skills and flew kites to play with children in his spare time. When he died, people built a temple to worship him and organize an annual kite festival to commemorate the general, making it the largest of its kind in the North.

Every year on the fifteenth of March in the lunar calendar, the festival welcomes thousands of people from Vietnam and other countries to attend the kite flying competition as well as enjoy the colorful sky with hundreds of flute kites.

Flying flute kites are the typical of Ba Giang. The flute is attached with the kite, producing the sound when the kites fly high in the sky. The flute sound can show the experience and the feeling of the player.

To Ba Giang people, making and flying kites is a part of their life. It is handed down from generations to generations to be preserved as the traditional cultural values of the homeland. Ba Giang Kite Club has more than forty members who travel to many localities in Vietnam and other countries to perform the art.

Homeland of the Queen of ca tru

Dai Phu Village in Thuong Mo Commune was the cradle of ca tru in the area and the homeland of the Queen of this folk singing. Recognized as an intangible heritage by UNESCO, Ca tru is a complex form of poetry recital found in the North using lyrics written in traditional Vietnamese poetic forms. The varied forms of Ca tru fulfill different social purposes, including worship singing, singing for entertainment, singing in court and in competition.

In the 17th century, a woman named Nguyen Thi Hong from Nguyen Duy family in the village, who was very intelligent and talented at poetry and singing, especially ca tru married to King Le Hy Tong (1663-1718). In the palace, she trained concubines on ca tru singing and organized royal music events. When she died, people in Thuong Mo built a temple to worship her as the Queen of ca tru.

For hundreds of years, the descendants of the Nguyen Duy family have still devoted themselves to ca tru until today. A woman of the seventh generation, artisan Nguyen Thi Tam still keeps the tradition of her family as well as the passion for ca tru in the village. She helped found Ca tru club in Thuong Mo since 2004 where she has taught ca tru to many new generations, including current famous artists and kids.

Last year, she was proposed by Hanoi City to be bestowed the title of  People's Artist for her contribution to ca tru.

Tan Hoi commune is the homeland of cheo tau, a second to none folk singing genre of the country. It is the performance of “two dragon shape boats” made of wood being rowed on land. It aims to commemorate the local heroes who expelled the invaders.

Accordingly, each boat has 13 “rowers”, including a “captain” who leads “sailors”, numbering between 13 to 16, in a choir. It is indispensable to have a pair of elephant statues following each boat to represent the famous battles of the ancestors. Each elephant is controlled by two women disguised as men. All the performers are women, making it another unique feature of this art. There are different parts of the singing, including individual singing, singing in pair, and responsive singing between the two boats.

Since 1998, cheo tau festival has been restored and held annually, marking the strong revival and development of the art. There are passionate artists who have devoted to the collection of folk songs and training the young generation on this art form. They are also the key leaders in establishing, maintaining and developing the Tan Hoi Cheo Tau Club which has been active for 20 years. 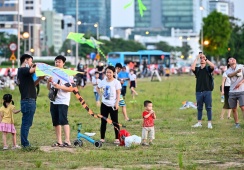