Defense ties with India are aimed at peace, security and development, Hanoi says

Vietnam said that it has defense ties with various countries, including India following a Memorandum of Understanding (MoU) on Mutual Logistics Support that the two countries signed in June 2022.

The defense partnership is for peace, security, and development in the region and the world, Deputy Spokesperson Pham Thu Hang said at a press conference on July 21.

Hang made the statement in response to a question on the MoU signed during the visit paid to Hanoi by Indian Defense Minister Rajnath Singh on June 7-10.

The pact will allow the armies of the two countries to use each other’s bases for repair and replenishment of supplies, according to Indian media, which reported that it’s the first such major agreement that Vietnam has signed with any country.

Another agreement signed during Singh's visit is a vision document to boost the “scope and scale” of defense ties by 2030.

The two documents are viewed as a major upswing in Vietnam-India strategic ties amid common concerns over traditional and non-tradition security threats in the region and the world.

“In these times of increasing cooperative engagements between the defense forces of the two countries, this is a major step towards simplifying procedures for mutually beneficial logistic support,” India Times cited India’s Ministry of Defense.

The ministry also stated that India and Vietnam continue to have the “most trustworthy relations in contemporary times with broader convergence of interests and common concerns.”

During the visit, the two sides agreed on the early finalization of the US$500-million defense Line of Credit (LoC) extended to Vietnam by India. According to the Indian Defense Ministry, the implementation of the projects under the LoC will add substantially to Vietnam’s defense capabilities and further Indian Prime Minister Narendra Modi’s vision of “Make in India, Make for the World.”

Singh also announced the gifting of two simulators and monetary grants towards setting up a language and IT laboratory at the Air Force Officers Training School for capacity building of Vietnam’s Armed Forces.

Vietnam has become an important partner in India’s Act East Policy and this country’s  Indo-Pacific vision. In 2016, the relations were elevated to Comprehensive Strategic Partnership during Modi’s visit to Vietnam. 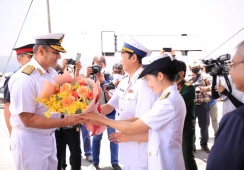 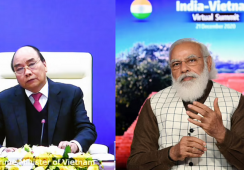