The series of the documentary film provides an opportunity for young generations of Vietnamese and international friends to better understand the wars fought in Vietnam in the 20th century.

The 22-episode documentary ‘The Chosen Path’, produced by the People’s Army Cinema, has just been completed and introduced to the audiences on the occasion of the 76th anniversary of Vietnamese National Day (September 2, 1945 – September 2, 2021).

The documentary series is made within four years, from 2018 to 2021, reflecting the pains and losses Vietnamese people suffered from wars. The film also praises the courage and unity of the Vietnamese army and people, who were determined to fight against the oppression of the French colonialists and American imperialists to regain the independence of the nation.

This documentary series also deals with other lesser-known wars, specifically, the campaigns to protect the southwestern border (1979) and the northern border (1984); the naval operations to defend the national seas and islands; the military campaign to overthrow the genocidal regime of Pol Pot, among others are also featured in the film series.

According to the Director of the People's Army Cinema Department, Colonel - Meritorious Artist Pham Tien Cuong, the effective cooperation between seasoned war filmmakers and talented young producers is the key to the success of the documentary series.

“The documentary film series is highly appreciated by experts for its systematic reflections and objective views of history while still being able to attract young audiences,” he said.

“Although the series was produced during a complicated time of the Covid-19 pandemic, the People's Army Cinema has overcome all difficulties so that the film can be released on schedule,” he added. 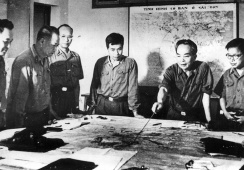