Hanoi said it will facilitate the plan of establishing an academy, which will mark the participation of nearly 30 European educational institutes.

Representatives of the European Union (EU) have high expectations for the establishment of an EU-standard university in Hanoi.

Ambassador Giorgio Aliberti expected that the city’s authorities would facilitate the plan to build EU Management University, a high-quality academy to be joined by nine leading European educational institutes and 20 universities as well as several Vietnamese partners.

This is a well-prepared plan in terms of expertise and finance, helping develop Hanoi’s manpower and promote its image, Ambassador Giorgio Aliberti said.

The EU side also suggested the city’s specific contact and confirmation of other facilities conditions for the plan.

For his part, Chu Ngoc Anh highly appreciated and supported the plan, saying that it’s a feasible project. He pledged that the municipal authorities would facilitate the plan in the time to come.

Also at the meeting, the two sides discussed other fields of cooperation under the EU–Vietnam Free Trade Agreement (EVFTA) and other sectors that have helped Hanoi develop over the past time. On this occasion, Hanoi expected the EU to push up the Covid-19 vaccine supply to the city.

The municipal government’s leader said its green growth target for the 2021-25 period and the next 10 years would focus on the people-centered approach. The city, therefore, will take efforts on administration reforms and facilitate investment and operations of investors, including those from the EU. 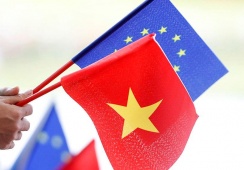