Experts put forth solutions for bike-sharing services in Hanoi

Hanoi needs a detailed solution to support the development of the new mean of public transportation, experts said.

The Hanoi People's Committee is considering a plan submitted by its Department of Transport to deploy 1,000 public rental bicycles in six urban districts in 12 months. Half of the bicycles are electric.

The project is valued at VND30 billion ($1.2 million). The Tri Nam Group has requested free use of the sidewalks during the deployment.

The project is intended to encourage more Hanoians to use the subway and reduce the burden on transportation infrastructure, according to the Hanoi Department of Transportation.

In addition, the plan will provide an optional means of public transport for the people, connect metro stations and bus stops with residencies, office buildings, apartment buildings, and shopping centers, the agency said.

According to the Hanoi Department of Transport, shared bicycles have been popular in Ho Chi Minh City and several other provinces. As of July 31, 2022, the total number of public bicycle users amounted to more than 218,000.

“Bike sharing is necessary for major cities in Vietnam such as Hanoi. The service has already been available in HCM City and public bikes are highly appreciated by the people,” he said.

The developer should install the bike station in a network that connects bicycles to other means of public transportation, such as bus and urban rail, Chung said.

The bike station should be located near busy areas, such as shopping malls, schools, and hospitals. This way, people will find public bicycles convenient to use. Authorities should improve communication activities to educate people about using public bicycles, he added.

There are no separate lanes for bicycles in Hanoi, therefore, the service should be launched in the areas where bicycles can operate easily in the large number, Chung emphasized.

“Hanoi has seen strong developments in the public transport system in recent years. We have many bus routes, a metro line that has been operating for more than a year, and several others are underway,” Nguyen Van Toan, director of the public bicycle rental project at Tri Nam Group, said.

As there is only one operational metro line, many people have to walk a long distance to reach the station. Therefore, the metro line has not been the favorite of Hanoi people, he said, referring to the Cat Linh-Ha Dong urban railway.

“Our bicycle rental project will help settle the issue and support the development of the public transportation network in the city,” Toan highlighted.

The company has imported a large number of bicycles, he said, adding the bikes and bike stations are ready to operate once the Hanoi People’s Committee approves the project.

The number of bicycle riders has increased in recent years, Nguyen Duc An, head of West Lake Bikers Club, said. A bicycle docking station would not take up as much space as a car or motorbike parking lot does, he added. “The proposed rental fee of VND5,000-10,000 per 30 minutes is reasonable.”

Meanwhile, Dinh Dang Hai, senior specialist at HealthBridge Canada in Vietnam, said that Hanoi needs to get its infrastructures well-prepared to encourage the use of public bicycles, especially in a 500-meter range from the station.

“For instance, bicycle lanes and traffic lights must be safe or people would feel insecure when riding. The city authorities must definitely come up with an infrastructure development plan,” Hai stressed.

According to architecture and transportation specialist Tran Huy Anh, it is good that Hanoi authorities learn from international experiences about public bicycle rental, but the solutions should be proper and suitable with the culture of the city. 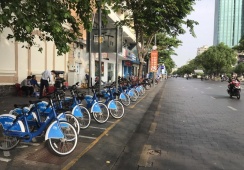 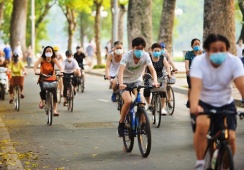