According to the Hanoi Department of Transport, the bike sharing service will enhance the quality of public transport and reduce environmental pollution.

The Hanoi Department of Transport has developed a detailed plan for the 12-month public bicycle pilot project in six metropolitan districts.

The company will install 94 bike docking stations with a total investment of VND30 billion (US$1.21 million) to provide 1,000 bicycles for rent. Half of the bikes are electrical.

Users can pay the rental monthly, quarterly, and annually through cash, bank app, and e-wallet. There will also be a specific app that allows users to search, book and unlock the bicycles.

Tri Nam Group also asks for the free use of sidewalks to install bicycle docking stations.

According to the Hanoi Department of Transport, the bike-sharing scheme will enhance the quality of public transport, change people's mobility behavior and reduce environmental pollution.

Dao Viet Long, Director of the Hanoi Department of Transport, said that the city would evaluate Tri Nam Group’s request for the free use of pavements to best facilitate the public bike service.

Hanoi will study similar models deployed in HCM City and Vung Tau for a better submission to the local government for a final decision, Long said.

According to Tri Nam Group, it is impossible to implement free public bicycle services without additional sponsorship. It will take seven years for the company to recoup its investment in the service at the aforementioned fare levels.

Prior to Hanoi, Tri Nam Group launched the bike-sharing service in HCM City, Danang, Vung Tau, and Quy Nhon. Among these localities, HCM City was the first to deploy the scheme in December 2021. 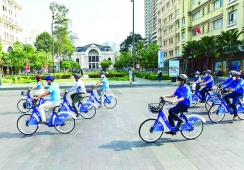 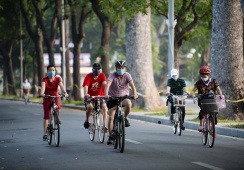