Another 450 Japanese experts will come to Vietnam by the weekend.

A group of 150 Japanese experts have arrived in Vietnam as the two countries begin to relax travel restrictions on a mutual basis.

The group landed in Van Don airport in the northern province of Quang Ninh on Thursday afternoon, becoming the first out of 450 Japanese experts and businessmen to come to Vietnam this week.

The experts came in a flight by national flag carrier Vietnam Airlines with the support of the Japan Chamber of Commerce and Industry (JCCI) in Vietnam.

All passengers wore protective suits and informed authorities of their medical status upon entry. They had their body temperature scanned and their luggage sanitized. They will be quarantined for the next 14 days as per existing Covid-19 prevention protocol, VnExpress reported.

Vietnam’s Ministry of Foreign Affairs said last week that an agreement has been reached with Japan to gradually relax travel restrictions between the two countries.

Vietnam has been in talks with China, Japan, South Korea and some other countries and territories on gradually recommencing travel, first for experts, corporate managers, and skilled workers.

Due to the global health crisis, Vietnam has closed borders to foreign visitors from March 22 and suspended international flights since then, except for repatriation flights and now the arrival of foreign experts and skilled workers for major projects.

In a similar move, Japan has banned the entry of visitors from 111 countries and territories to prevent the spread of the novel coronavirus.

Japan was Vietnam’s fourth largest investor in 2019 after South Korea, Hong Kong, and Singapore in terms of registered capital. It is Vietnam’s largest labor market, welcoming around 80,000 Vietnamese last year. 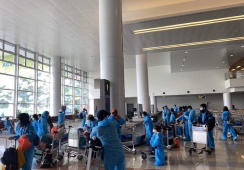