Local investors remain the driving force for the stock market to surpass the 1,200-mark in the coming time.

Foreign investors remained net seller on the Ho Chi Minh City Stock Exchange (HOSE), home for the majority of large caps, for 13 consecutive trading session as of today [March 9] with a total value of VND7.2 trillion (US$361.04 million).

At the trading session on February 19 when foreign investors first turned net seller, the net selling value stood at VND23 billion (US$1 million). However, the selling pressure has been increasing and reached its peak on March 5 with over VND1.33 trillion (US$57.85 million).

As foreign investors continue to pull money out of the market, SSI Securities Corporation (SSI) expected local investors to stay as the driving force to put the benchmark Vn-Index surpassing the 1,200-mark.

“Positive business performance of listed firms on HOSE since the fourth quarter of last year and the rollout of Covid-19 vaccine are factors to ensure positive outlook for the market in short-term,” noted the SSI.

Liquidity on the HOSE in February reached nearly VND13.8 trillion and averaged over 544 million shares per trading session, representing a decline of 17.3% in value and 25% in transaction volume against last month.

Despite the decline, liquidity on the stock market stood in stark contrast compared to the same period of last year, recording a surge of 204% in value and 129.4% in volume.

A report from Hanoi Stock Exchange (HNX) also revealed a decline in liquidity in February with 114 million shares per trading session and transaction value of VND1.86 trillion (US$80.9 million), down 22.8% month-on-month.

The total market capitalization on HNX, however, rose by 13.08% against late January to VND285.4 trillion (US$12.41 billion). Despite being net sellers on HOSE, foreign investors net bought over VND40 billion (US$1.74 million) in the HNX. 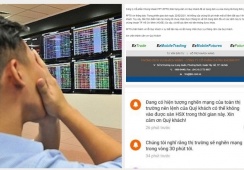