Pico Play to open new facility in Haiphong this year

Vietnam has emerged as a new epicenter of entertainment projects, attracting many international giants.

Pico Play, a subsidiary of Pico Group, a multinational in leisure and entertainment solutions, will this year open a regional office and a new fabrication facility in the northern port city of Haiphong, about 120km from Hanoi.

The latest move came from Pico Play’s plan to expand its international operations and Vietnam has emerged as a new epicenter of entertainment.

Noel Dempsey, Pico Play’s Sales Director, said Vietnam is a really interesting market that has just exploded over the past 10 to 20 years and one that is determined to make its mark, developing more of its own concepts, content theming and narratives, and doing so with a sense of pride.

Another unique factor is how themed attractions are developed in Vietnam - they are often on the back of a large-scale property development, where developers and construction groups acquire big parcels of land in beautiful locations for mixed-use precincts such as residential, accommodation, retail, and leisure.

These developers realize to stand out in an increasingly crowded market, they need an anchor attraction to support their investment, whether it’s a theme park, water park, and adventure park, he added.

Pico Play is also working on a number of adventure and nature parks owned by Novaland across Vietnam, alongside other attraction projects with World Investment and Development Corp., Bao Son Group and Phat Dat Corporation.

Pico Play, a global developer in the planning, design, development and construction of themed attractions and entertainment, currently has twenty-four projects in progress throughout six countries, with its latest facility in Vietnam acting as a gateway to North Asia. 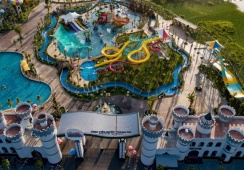