Goddess of Cloud- the ancient belief lays on nature

If you plan to travel to Hanoi, and want to do a spiritual tour to the temples, watch and learn their proud records as well as ancient architecture, the Phap Van Tu is an interesting religious destination.

Phap Van Pagoda is also known as Ba Sang Temple or Hai Ba Pagoda, located on Giai Phong Street, in Hoang Mai district. Being built since 1616, the pagoda was one among the oldest pagodas in town.

The pagoda worships Phap Van or the goddess of cloud, one of the four goddesses supervising the four forces of nature, namely cloud, rain, thunder and lightning in popular folk beliefs in northern Vietnam. The belief is said to form for thousand years ago in Vietnam when agricultural life was entirely dependent on nature.

In 1991, the pagoda was recognized as a national monument. One of most impressive characteristics of the pagoda is its sophisticated entrance, which consists of four tall pillars and two small arches overlooking Linh Dam Lake.

Behind the gate is a long yard paved with bricks, in the west side of the yard there are some old longan trees that shade another statue of Buddha Statue of Avalokitesvara built more than ten years ago, the back of the statue faces the pagoda’s paddy field.

The pagoda is by the side of a big thoroughfare but its spacious and airy campus provides a tranquil atmosphere. The first impression when entering the temple is the Great Buddha of Sakyamuni statue is at the gate of the temple.

The pagoda layout has been shaped since the Nguyen dynasty in the form of the Chinese letter Cong (空) in the inside and the letter Quoc (國) in the outside, facing the south. The main worshiping chamber is 21 meter wide, nine meter long with some parts carved with the image and shape dragon.

The front hall consists of three rooms, the Buddha altar is in the middle decorated with the image of dragon and lotus, the altars on its two sides are dedicated to the genies. The two sides of the back have two rows of corridors, a small courtyard with ornamental plants and then the newly built worshiping chamber.

On the right there is a pomelo garden and a monk dorm and, on the left, there is a small pond and a guest house. In the front of the worshiping hall, there are a pair of stone dragons carved from the Le Trung Hung or The Revival Le dynasty period from 1533 to 1789.

At the lower part, there are two larges reliefs telling the story of a dragon. In the center of this picture there is a large dragon with its head facing up the upper chamber, embellished with legendary animals, flowers and leaves.

In the middle of the upper chamber, there is a wooden shrine with its roof in the shape of a boat’s steer and three screens with mollusc shell inlays depicting "dragon in the cloud”.

Walking into the main worshiping hall of the pagoda, visitors will be impressive with the brown wooden statue of Phap Van goddess, which is in 1.3 meter high. The statue sits cross-legged, the left hand is on the thigh, the right hand is raised forward. The Ginie wears jewelry with a kind face and a meditating look. She wore a dress with a belt carved into the body and tied in the front. Although wearing a Golden Buddha hat, the top of his head revealed a bun.

Until the present-day, the pagoda still preserves many precious antiques that the most important of all is the stele titled "Phap Van Tu story carved on epitaph", built in 1616 at the pagoda yard. It is about the repair of the pagoda, the back chamber and the hallway funded by the villagers and several officials, mandarins in and out of the area.

Visiting Pham Van Tu, visitors not only have chance to learn its proud records and ancient architecture but also immersed themselves in the tranquil vibe of the pagoda. 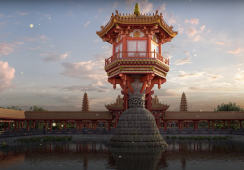 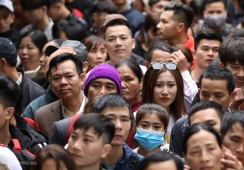 Pilgrims asked to wear masks when visiting pagodas and temples