The prime minister highly regarded the visit of the Governor amid the Vietnam-Cambodia, Cambodia – Vietnam Friendship Year 2022, and the 55th anniversary of diplomatic relations (June 24, 1967 – June 24, 2022).

“Such a visit would help strengthen the comprehensive relations in general, and between Phnom Penh with Hanoi and Ho Chi Minh City in particular,” Chinh added.

Chinh congratulated the major victory of the ruling Cambodian People’s Party in the commune election in June, expecting the country to achieve greater results in national construction and development.

Vietnam currently has 188 valid projects in Cambodia with registered capital of $2.8 billion, ranking first among ASEAN and in the top 5 largest investors in Cambodia.

In the spirit of sincerity, trust, and responsibility, Chinh said Vietnam gives high priority to maintaining strong relations with Cambodia, in turn bringing substantial benefit to the people of the two countries.

According to Chinh, Vietnam stands ready to support Cambodia in successfully hosting the ASEAN 40-41 Summit, and SEA Games 32th in 2023, thereby raising Cambodia’s status in the region and on the global stage; protecting the lawful rights of countries, and maintaining solidarity within ASEAN for peace, stability, and development in the region and of the world.

He congratulated Vietnam on the occasion of Independence Day and major achievements in socio-economic development and pursued the goal of becoming a developed country by 2045.

Khuong Sreng said Cambodia would never forget Vietnam’s contribution to overthrowing Pol Pot’s genocidal regime, saying without the latter’s assistance, there would be no Cambodia as today. 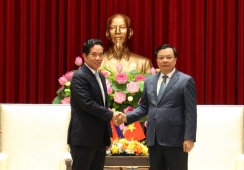