Hanoi F1 Circuit to be used for 1st time

A Hanoi’s official said the city and the Formula One Group keep working to see if the Vietnam Grand Prix will be held from 2022 to 2029 or not.

The Hanoi Circuit, which missed the 2020 Vietnam Grand Prix due to Covid-19, will be used for Motorkhana, a low-cost form of motorsport, on January 15.

Held for the first time in Vietnam, Motorkhana is the national auto racing contest allowing the participation of both male and female drivers. The winners will be selected to take part in the 2022 FIA Motorsport Games to be organized in Marseille, France in October 2022.

Motorkhana is a motorsport event designed to test the acceleration, braking, and handling of cars and the skill and judgment of drivers. Different sizes and types of cars are separated into classes, meaning that more than one driver can take home a trophy.  At many events, special awards may be offered to encourage novice, junior or female drivers.

Work on the Hanoi Circuit, which is a 5.6km semi-permanent track with 23 curves, officially commenced in March 2019, by the My Dinh National Stadium.

According to Dinh Van Luyen from the Hanoi’s Department of Culture, Sports and Tourism, Hanoi’s authority and the Formula One Group are still working to see if Formula One (F1) Racing will still be held in Vietnam from 2022 to 2029 or not.

Formula One is the highest class of international open-wheel racing for single-seaters sanctioned by the Fédération Internationale de l'Automobile (FIA).

According to FIA, Vietnam is selected for F1 because it’s a fascinating country, blending more traditional south-east Asian culture with the country’s French colonial past.

Vietnam is not alone on the F1 calendar in offering visitors the chance to tack on some beach holiday action, the country does boast some of the world’s finest stretches of sand, which can be found less than three hours’ drive from the Hanoi track – as can the iconic Ha Long Bay, a location used in films like “Tomorrow Never Dies” and “Kong: Skull Island”. 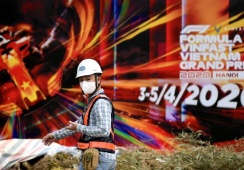 Formula One Vietnam Grand Prix canceled due to Covid-19