The Central Hospital for Tropical Diseases in Hanoi had treated a number of seriously ill Covid-19 patients and its staff are now willing to share their experiences with Danang.

Danang city, which is now the largest epicenter of Covid-19 in Vietnam, has welcomed dozens of doctors, nurses, and all forms of support from other localities nationwide, including Hanoi, in its fierce battle against the Covid-19 outbreak, local media reported.

The coastal city, which has recorded over 200 active infections, has struggled with a shortage of medical staff as many local doctors, nurses, and medical technicians are in full or partial isolation while three hospitals and medical facilities in the city have been placed on lockdown due to connections with coronavirus patients, according to the Ministry of Health.

On July 31, a group of experts from Hanoi arrived in Danang to assist the city in the quarantining process.

Deputy Prime Minister Vu Duc Dam requested all functional forces, especially health units, the army and the police to raise their awareness and stand ready to respond to evolution of the pandemic in the epicenter.

On August 3 afternoon, two experts from the Central Hospital for Tropical Diseases in Hanoi, including its Deputy Director Dr. Nguyen Trung Cap, and Deputy Head of the Department of Positive Recovery Dr. Dong Phu Khiem left for the central city.

Dr. Nguyen Trung Cap said that the Central Hospital for Tropical Diseases in Hanoi had treated a number of seriously ill Covid-19 patients and its staff are now willing to share their experiences with Danang.

“We hope to pass those experience to our colleagues in Danang, giving them more confidence in their Covid-19 treatment,” Cap told suckhoedoisong.vn.

Dr. Luong Ngoc Khue, head of the Administration of Medical Examination and Treatment under the Ministry of Health, said that the two experts will assess the Covid-19 evolution in Danang city.

Then, they will make a plan to transfer human resources to support Danang's hospitals. The Central Hospital for Tropical Diseases in Hanoi is now treating and isolating some 20 Covid-19 cases who have returned from Equatorial Guinea, Khue said, citing the Ministry of Health.

The ministry and top hospitals in the country, including Bach Mai Hospital in Hanoi and Hue Central Hospital in central Thua Thien-Hue province, have worked closely together to support Danang in terms of disease prevention and control, testing and treatment.

Besides, on August 3 night, Dr. Nguyen Lan Hieu, director of the Hanoi University Medical Hospital, reviewed his hospital’s human resources specializing in infectious diseases and rehabilitation. Hieu himself led a team of doctors to travel to the central province of Thue Thien-Hue by car because flights to the city had been banned, carrying with them protective gear, medicines and medical equipment.

"I'm glad the number of volunteers exceeds the number of doctors. I am looking forward to bringing more doctors into the epidemic center to assist the severely ill patients," Hieu told VnExpress.

Meanwhile, the Vietnam Fatherland Front Committee of Hanoi has sent VND1 billion (US$43,300) to Danang together with 100,000 medical masks and 224 bottles of hand sanitizer to the coastal city, Tuoi Tre online reported.

The committee also granted US$43,300 to Quang Nam province, which has 55 active cases and two fatalities.

At the time of writing, Vietnam has documented 750 Covid-19 cases, with 392 recoveries and ten deaths, since the pandemic first hit in January, the health ministry said. Most of the new cases are linked to hospitals in Danang where the first locally transmitted infection in more than three months was confirmed on July 25.

The ministry stressed that up to 800,000 visitors have left Danang for other parts of the country since July 1, and more than 41,000 people have visited three infected hospitals in the city.

New coronavirus cases have been detected in other cities, including Hanoi and Ho Chi Minh City, with links to Danang, the ministry noted. 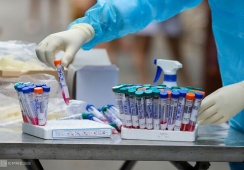 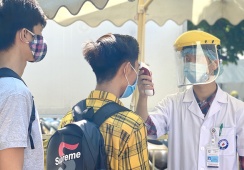 Covid-19 epicenter in Danang must be stamped out: PM