Vietnamese leaders call Abe Shinzo a great and loyal friend of Vietnam, who contributed to the bilateral relations with affection, sincerity, and trust.

A delegation of high-ranking officials of Hanoi, Vietnam today render homage to late Japanese Prime Minister Abe Shinzo at the Embassy of Japan in the capital city.

The delegation led by Nguyen Thi Tuyen, Deputy Secretary of the Hanoi’s Party Committee, paid tribute to the friend of Vietnam and left tribute in the condolence book.

“We are saddened at the passing of Mr. Abe Shinzo, former Prime Minister of Japan, a prestigious international leader, and a great friend of Vietnam. Former Prime Minister Abe Shinzo had dedicated his life to the prosperity of the land of the rising sun, to peace and development of Asia and the world,” Tuyen wrote.

The people of Vietnam in general and Hanoians in particular always appreciate Abe's precious affection and support to the country and people of Vietnam, as well as the relationship between the two countries, she wrote in the book.

On July 11, Vietnamese top leaders including President Nguyen Xuan Phuc and Prime Minister Pham Minh Chinh paid homage to Abe at the embassy. In the condolence book, PM Chinh wrote: “The passing of Mr. Abe Shinzo is the loss of Japan and the international community, including Vietnam.” “The special affection and great support that Mr. Abe gave Vietnam and his contribution to the Vietnam-Japan relations are valuable assets.”

Chinh called Abe a big, close, and loyal friend of Vietnam who treated Vietnam with affection, sincerity, and trust.

The Vietnamese PM called for tightened relations between Vietnam and Japan for the prosperity of each country and for peace, cooperation, and development in the region, the cause that Abe largely contributed to.

Meanwhile, General Secretary of the Communist Party of Vietnam Nguyen Phu Trong and Chairman of the National Assembly Vuong Dinh Hue sent wreaths to pay tribute to the great friend of Vietnam.

Other high-profile officials who went to the Japanese embassy to pay tribute to the late PM including Foreign Minister Bui Thanh Son, Minister of Planning and Investment Nguyen Chi Dung, and Head of the Party Central Committee’s Commission for External Relations Le Hoai Trung.

On these days, hundreds of Vietnamese and Japanese queued outside the embassy to render homage to Abe Shinzo. 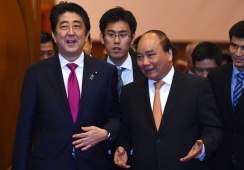 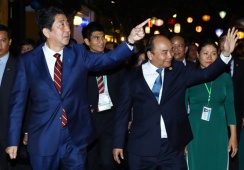 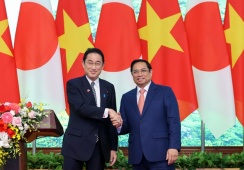 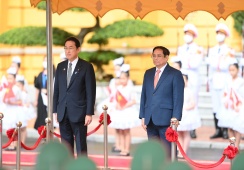