Hanoi has protested Beijing’s series of ballistic missiles during military exercises around Vietnam's Hoang Sa (Paracel Islands) in the South China Sea between August 23 and 30.

“All activities in Vietnam’s Hoang Sa (Paracels) and Truong Sa (Spratlys) without Vietnamese permission are infringement of Vietnam’s sovereignty over these archipelagos, harming peace, stability, security, safety, and freedom of navigation in the East Sea,” Spokesperson Le Thi Thu Hang of Vietnam’s Ministry of Foreign Affairs said on Monday.

Hang said Vietnam’s stance on the sovereignty over Paracels and Spratlys is consistent when she referred the East Sea to the South China sea.

China launched two mid-range missiles, a DF-26B from the northwestern province of Qinghai and a DF-21D from Zhejiang province in the east, last week into the South China Sea, sending a clear warning to the United States.

The move came one day after China said a US U-2 spy plane entered a no-fly zone without permission during a Chinese live-fire naval drill in the Bohai Sea off its north coast.

According to the US Department of Defense, China has escalated its exercise activities by launching four medium-range missiles impacting the stretch between Hainan Island and the Paracel Islands.

The Pentagon said that Chinese test launches of ballistic missiles in the South China Sea were a threat to peace and security in the region.

“Conducting military exercises over disputed territory in the South China Sea is counterproductive to easing tensions and maintaining stability," the department said in a statement.

"Such exercises also violate PRC commitments under the 2002 Declaration on the Conduct of Parties in the South China Sea to avoid activities that would complicate or escalate disputes and affect peace and stability," the Pentagon added. PRC stands for the People's Republic of China.

Over the past decade, China has built up military installations on several disputed reefs and outcrops in the South China Sea to assert its claim over much of the area where Vietnam, the Philippines, Malaysia, Taiwan, and Indonesia are also claimants. 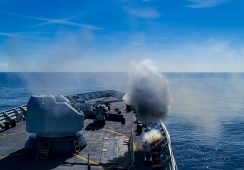