Hanoi aims to become one of the top three biggest logistics hubs in the country and of the region, with the industry making a greater contribution to the gross regional domestic product (GRDP) and meeting growing demands for goods transportation domestically and aboard.

Vice Director of the municipal Department of Industry and Trade Nguyen Thanh Hai gave the remarks while referring to the proposal on promoting logistics development until 2025.

Under the proposal, Hanoi is set to have two major logistics centers by 2025. The first one, expected to cover an area of 50 hectares and located at the city’s northern gateway, would serve the purpose of transporting goods to other provinces/cities via road and air freight.

In the southern gateway, there would be another logistics center with an area of 22 hectares to support the flows of goods to industrial parks in the southern region of Hanoi.

“These centers would link with major seaports, airports, bus stations, or industrial parks, along with a logistics center right inside the Noi Bai International Airport,” said Hai.

“As Vietnam is further integrating into the global economy and trading activities are playing a more important role in overall growth, the development of logistics sector has greater significance,” Hai said.

“Investment in logistics infrastructure and the formation of a logistics network would be the required steps for the industry to become a spearhead economic sector of the capital city,” Hai suggested.

While the targets are clear, the realization of this goal would require more effort from local logistics companies. Of the total 25,000 firms in this field in Hanoi, 80% are private but only meet 25% of the market demand, mainly due to small scale and limitation in technology, capital, and human resources.

In contrast, a handful of multinational logistics companies in Vietnam, such as Kunhe Nagel, Schenker, Bikar, or APL Logistics are holding 70% of the market share due to their large networks and modern technologies at disposal.

Inadequate logistics infrastructure system is seen as a major issue restricting the development of the sector, as there are limited options to link road transportation to other models such as railway or inland waterway.

Vice Minister of Industry and Trade Tran Quoc Khanh in a recent conference said with the majority of logistics companies being small and medium-sized firms, a stronger linkage between them would foster the sharing of knowledge, experience, and trust for greater efficiency in operation.

“Vietnam is in need of large enterprises serving as the industry leaders to support the sector’s stronger growth,” he noted. 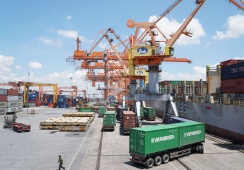 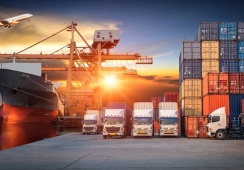 Logistics sector in Vietnam to prosper despite Covid-19 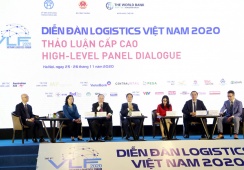 Hanoi targets to have 10 logistics centers