The capital city of Hanoi expects tighter relationship with Phnom Penh on the 55th anniversary of the diplomatic relationship between Vietnam and Cambodia.

Hanoi expects the relationship with Phnom Penh, the capital city of Cambodia, will improve in the future to boost the bilateral relationship between the two nations, Secretary of the Hanoi Party Committee Dinh Tien Dung said on October 25.

Dung made his remarks at the meeting with Samdech Say Chhum, President of the Cambodian Senate as the latter visited Vietnam on the invite of the Chairman of the National Assembly Vuong Dinh Hue.

Speaking at the meeting, secretary Dung congratulated Cambodia for its achievements in terms of political stability, socio-economic growth and improved status in the international community.

Dung said that Vietnam and its capital city of Hanoi always appreciate the assistance and affection brought by the State, the Government and people of Cambodia.

"Hanoi wants to promote its ties with Phnom Penh, the capital of Cambodia, for the prosperity of the two cities and nations," Dung said.

“Hanoi hopes the President of the Cambodia Senate will instruct local authorities and ministries to bolster the relationship between Hanoi and Phnom Penh to effectively fulfill bilateral commitments,” he said.

According to the Hanoi official, Hanoi and other Vietnamese localities have fully reopened in the post-pandemic stage. The city recorded a 9.69% growth rate in gross regional domestic product (GRDP) in January-September of 2022 – the highest rate in recent years.

The capital city is now focusing on long-term development activities with focus on the three fields of education, healthcare and historical-cultural preservation. Hanoi targets to become the city of “Literature – Civilization – Modernity” and the center of development in the northern region and the country with high competitiveness, integration, income and living standards.

In reply, the President of the Cambodian Senate Samdech Say Chhum spoke highly of the greetings from Hanoi.

He said that his visit to Vietnam at the invitiation of the Chairman of the National Assembly Vuong Dinh Hue is an opportunity for the two nations to strengthen their relationship and celebrate the 55th anniversary of the diplomatic relation and the Year of Vietnam-Cambodia Friendship 2022.

The results of the visit will assist the enhancement and development of the Vietnam-Cambodia friendship and comprehensive relationship, Samdech Say Chhum said.

He hoped the bilateral relationship will further improve and bring about benefits for the people and the two governments.

Samdech Say Chhum also sent the regards from the leaders of Phnom Penh to secretary Dung and other leaders of Hanoi. The two officials and their delegates also discussed some issues of mutual concerns. 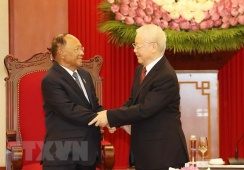