Head of Bac Ninh province Taxation Department said the information published on Japanese media could not be verified until the CEO of Tenma Vietnam returns to Vietnam.

Several Japanese media outlets, including Asahi, Kyodo, Nikkei, have reported that Vietnamese public officials have taken 25 million yen (US$232,000) in bribe from a Vietnam unit of a Tokyo-based company named Tenma.

The article, published on Asahi on May 12, said Tenma, a plastic product maker, admitted to the Tokyo District Prosecutor that it paid the said amount through Tenma Vietnam Company at Que Vo industrial park, Bac Ninh province.

According to Dan Tri, the first payment was made in June 2017, Tenma Vietnam, after having consulted the parent company, bribed Vietnamese officials with VND2 billion (US$85,861), which resulted in the remission of the entire VND400 billion (US$17.17 million) of tax arrears.

Kento Fujino, president of the parent company, is set to take full responsibility of the issue and would resign at the company’s shareholder meeting in June.

Ngo Xuan Tong, head of Bac Ninh province Taxation Department, told Tien Phong that the department had submitted reports to the Ministry of Finance and relevant agencies regarding the allegation.

However, as CEO of Tenma Vietnam has not been able to return to Vietnam due to travel restrictions, the information published on Japanese media could not be verified, Tong said. 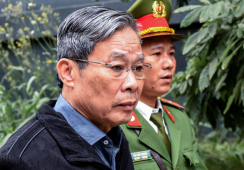