Secretary Pompeo in July stated that the US government is committed to making the next 25 years of the US-Vietnam ties “a model of international cooperation and partnership."

US Secretary of State Mike Pompeo has arrived in Hanoi on Thursday evening for a surprise visit as the two former foes are moving to strengthen their comprehensive partnership amid China’s growing assertiveness in the South China Sea, local media reported.

The visit was made at the invitation of Deputy Prime Minister and Minister of Foreign Affairs Pham Binh Minh, and appears to result from a last-minute decision.

The visit is “to reaffirm the strength of our comprehensive partnership, celebrate the 25th anniversary of US-Vietnam diplomatic relations, and discuss issues in the South China Sea and Mekong regions of mutual concern,” adds the statement.

Vietnam is the last stop in Mr. Pompeo’s Asia tour that included India, Sri Lanka, Maldives, and Indonesia. Vietnam was not originally scheduled for this visit, which “is another manifestation of the strengthening ties between the two countries amidst the increasing strategic tensions between the US and China,” wrote Le Hong Hiep, a fellow at the ISEAS–Yusof Ishak Institute, in an article published on The Diplomat.

Vietnam was the first country in Southeast Asia that Mr. Pompeo visited in July 2018 after taking office.

In a statement commemorating the 25th anniversary of the establishment of diplomatic relations between the US and Vietnam in July 2020, Secretary Pompeo stated that over the last quarter century, the two countries have built a partnership and friendship founded on shared interests, mutual respect, and people-to-people ties. The US government is committed to making the next 25 years of the US-Vietnam ties “a model of international cooperation and partnership.”

During Pompeo’s visit, the two sides are expected to discuss how Vietnam and the US can cooperate to advance a Free and Open Indo-Pacific and ASEAN’s Outlook on the Indo-Pacific, according to Prof. Carl Thayer, a Vietnam expert.

“The United States stands with our Indo-Pacific allies and partners in protecting their sovereign rights to offshore resources in the South China Sea, consistent with their rights and obligations under international law,” said the State Department statement.

Vietnam is one of America’s fastest growing markets while the latter is one of the former’ biggest export markets. Over the last 25 years, two-way trade has jumped from US$450 million in 1994 to more than US$81 billion in trade annually today.

At the recently-concluded Indo-Pacific Business Forum held in Hanoi, Vietnam and the US announced seven deals worth billions of US dollars, mainly in energy and agribusiness sectors. They are expected to help balance bilateral trade. 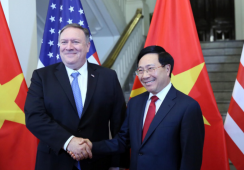