The funeral and the memorial services will be held simultaneously in three places including Hanoi, Ho Chi Minh City, and his hometown - the central province of Thanh Hoa.

Top former and incumbent leaders attended the funeral that is broadcast live on the national station Vietnam Television (VTV) on Friday morning.

During the state funeral, national flags will be flown at half-mast at offices and public places. Leisure activities will be suspended.

Lieutenant General Le Kha Phieu, who held the position of general secretary from December 1997 to April 2001, passed away on August 7 at the age of 89.

He will be buried at the Mai Dich Cemetery in Hanoi, the resting place for high-ranking officials and people with special merits.

Chairman of FPT Corporation Truong Gia Binh regarded Mr. Phieu as a sponsor for Vietnam’s software export industry thanks to his visionary leadership.

VnExpress and Dan Tri contribute to the photo gallery. 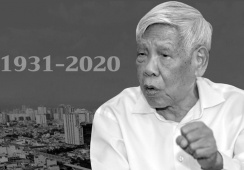