Vietnam said all development decisions must be nature-based and centered around people to ensure sustainable development in which no one would be left behind.

Vietnam, a developing country, has stressed the importance of an all-people approach in coping with a global issue – climate change – and its roadmap to achieve a net-zero target by 2050 it has declared.

The idea has been included in Prime Minister Pham Minh Chinh’s speech at the 2021 United Nations Climate Change Conference (COP26) held in Glasgow, the UK, in early November, as part of efforts to promote the engagement of all people in Vietnam in realizing its commitment at the global event, according to Pham Van Tan, Deputy Head of Vietnam’s Climate Negotiation Delegation.

It’s interesting that Vietnam has stipulated the role of its people in the common drive, making it the key factor for the implementation of the climate goal, Tan said at the workshop held today [December 7] on Outcomes of COP26 and Actions from Vietnam, Announcement of Climate Change Scenario – 2020 Version.

Tan, who is also Deputy Director General of the Ministry of Natural Resources and Environment (MONRE)'s Department of Climate Change, said Vietnam has emphasized the role of its domestic strengths and made full use of its internal resources in the journey to addressing global challenges.

Vietnam PM’s speech at the event announcing the global methane pledge at COP26 stated that “people must be at the center, the actors, the goal and the driving force of methane emissions reduction.”

“All that we do must be nature-based and centered around people, for they are the actors and

drivers of sustainable development, in order to leave no one behind,” he noted.

Another point that PM Chinh stressed is the “ethical standards” as he reckoned climate change response and the restoration of nature must become the top priority in all development decisions. For that reason, they must form the highest ethical standards for all levels, sectors, businesses, and citizens.

In this regard, all countries need to make stronger commitments on greenhouse gas (GHG) emissions reduction, grounded on the principle of common but differentiated responsibilities, respective capacities, and circumstances.

Notably, the Vietnamese PM called for “justice” in approaching the global thorny issue. “Let me take this opportunity to call for justice and fairness in the fight against climate change. This is imperative to limit the global temperature increase,” he stated.

At COP26, Vietnam has also agreed to support a number of important statements and initiatives on protecting forests, shifting to clean energy, supporting adaptation for local communities, and methane reduction.

All of these statements further strengthen Vietnam’s commitment to tackling climate change.

However, implementing the goal requires long-term efforts that should be made by different sectors, participants said at the event that also marked the attendance of representatives of ministries, embassies, and development partners.

In pursuit of the decade-long goal, Vietnam is advised to maintain its strengths and resources with foreign assistance, including financial mechanisms.

He said that the announcement of Vietnam’s net zero emissions target by 2050 has impressively demonstrated its climate leadership and sent an important message to the international community on Vietnam’s strategy on a sustainable economy.

He noted that the UK and its development partners are committed to promoting and supporting Vietnam in achieving the new goals by strengthening its proposals for financial and technical support.

“We want to support Vietnam’s Government to find the right combination of increased public investment, drawing on ODA and concessional loans to reduce the cost for the country, and regulatory measures to make Vietnam attractive for green investment in the next 20 years,” Gareth Ward affirmed.

She said it is now time to align policies, legal framework, strategies, plans, investments to achieve these new targets, noting that net-zero carbon emissions by 2050 is an ambitious target, but achievable with the strong leadership of the Government.

“UNDP is committed to working closely with the Government, development partners, businesses, scientists, women, youth, and local communities, to pursue a whole-of-government and whole-of-society approach for realizing the new climate ambitions.” This will be complemented by simplifying regulations to enable the business sector to contribute fully to a green economic rebound with people at its center, she noted.

COP26 is the 26th session of the Conference of the Parties of the UN Framework Convention on Climate Change (UNFCCC), which was held in Glasgow, UK from October 31 to November 12, 2021.

As the host of COP26, in partnership with Italy, the UK pursued negotiations and commitments around four key goals: urging for global net emissions of zero by the middle of the 21st century to keep the global temperature rise under 1.5°C; adapt to protect communities and habitats; mobilize finance and promote collaboration to bring success to COP26 for people and our planet.

Almost 200 countries came together in Glasgow, in the biggest international summit the UK has ever hosted. 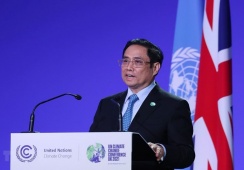 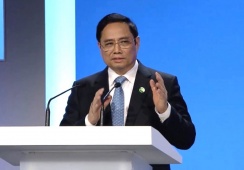