Vietnam plans to dispatch a group of 295 engineer officers for peacekeeping missions in 2021.

Vietnam has reiterated that peacekeeping continues to be one of pillars in its defense diplomacy and regarded as a focal point in the army’s multilateralism.

Contributing to the United Nations’ peacekeeping missions has reinforced Vietnam’s defense relations with other countries, promoting the national image in the international agendas, Sen. Lt. Gen Nguyen Chi Vinh said at a meeting on January 7.

Defence diplomacy has been seen as one of important channels contributing to the national sovereignty protection in a peaceful manner on the basis of international law, gradually building trust and Vietnam’s ‘soft power’, the deputy Defence Minister said.

In 2021, Vietnam plans to dispatch a group of 295 engineer officers for peacekeeping missions.

In June 2018, the United Nations recognized VDPO as one of four centers in Southeast Asia for international training. Between 2018 and 2020, Vietnam provided three training courses for domestic and international officers.

Vietnam assumed the role of the Chair of the Association of Asia-Pacific Peace Operations Training Centers (AAPTC) for 2020-21 and its conference might be held in Vietnam in 2021.

Vietnam chaired the ASEAN Peacekeeping Centers Network (APCN) in July 2020 and another conference is scheduled to take place in the country in 2021.

The National Assembly, the country’s highest legislative body, on November 13, 2020 ratified a Resolution on Vietnam’s participation in the UN peacekeeping missions following the 2013 Constitution with supplementation on this issue.

Accordingly, a series of policies have been issued over the past years to support the peacekeeping missions that Vietnam regarded as efforts to prevent conflicts and wars in an active and early manner. 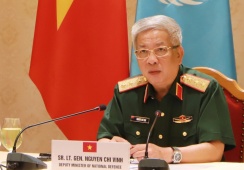