The Philippines’ Department of Foreign Affairs (DFA) has expressed deep concern over the sinking of a Vietnamese fishing boat in the South China Sea on April 2 after it was rammed by a Chinese enforcement vessel.

Such incidents undermine the potential of a genuinely deep and trusting regional relationship between the Association of Southeast Asian Nations (ASEAN) and China, the department said on its website Wednesday. “Given the positive momentum on the discussions on a Code of Conduct in the South China Sea (COC), it is crucial that such incidents be avoided and that differences be addressed in a manner that enhances dialogue and mutual trust.”

The DFA recalled of a Philippine fishing boat rescued by the Vietnamese side. “Our own similar experience revealed how much trust in a friendship is lost by it; and how much trust was created by Vietnam’s humanitarian act of directly saving the lives of our Filipino fishermen. We have not stopped and will not stop thanking Vietnam. It is with that in mind that we issue this statement of solidarity.”

There is never a good time to indulge in provocations; they usually end in defeat of aggression or a devastating price of victory. But it is always a good time to rise in the defense and affirmation of our respective sovereignties and in the peace and stability of our region especially in a time of pandemic. As we have said the creation of new facts in the water will never give rise to legal right anywhere or anytime. We therefore urge forbearance and good behavior to each and every government; and to extend that forbearance and behavior to people under our respective jurisdictions, said the DFA.

Manila also said the continued strengthening of regional relations was especially critical given the Asean-China joint commitment to tackle the Covid-19 pandemic.

“Covid-19 is a very real threat that demands unity and mutual trust,” the deparment said. “In the face of it, neither fish nor fictional historical claims are worth the fuse that’s lit by such incidents.”

On April 2 morning, a fishing boat from Vietnam's central province of Quang Ngai capsized after being rammed by a Chinese vessel near Vietnam's Hoang Sa (Paracel) Islands. Eight Vietnamese fishermen were detained on a nearby island in Hoang Sa. China released the fishermen on the same day.

After this incident, Vietnam’s foreign ministry lodged an official protest with China, saying that the Chinese vessel committed an act that violated Vietnam’s sovereignty over the Hoang Sa archipelago and threatened the lives and damaged the property and legitimate interests of Vietnamese fishermen. 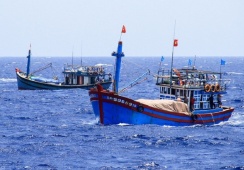 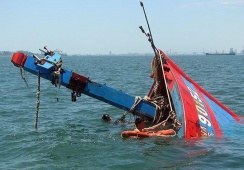