The UNESCO-recognized global heritage site of Phong Nha- Ke Bang National Park has recently been voted as one among 25 best national parks of the world in 2021 by TripAdvisor by travelers.

"The karst formation of Phong Nha-Ke Bang National Park has evolved since the Paleozoic (some 400 million years ago) and so is the oldest major karst area in Asia,” the renown website for traveling advises wrote.

According to TripAdvisor, subject to massive tectonic changes, the park’s karst landscape is extremely complex with many geomorphic features of considerable significance. The vast area, extending to the border of the Lao People’s Democratic Republic, contains spectacular formations including 65 kilometers of caves and underground rivers.

The Phong Nha – Ke Bang National Park in Quang Binh province was recognized as a World Natural Heritage Site by the United Nations Educational, Scientific and Cultural Organization (UNESCO) in 2003 for its significant geological and geomorphic features.

Covering 85,754 hectares, Phong Nha-Ke Bang National Park consists of 300 different caves and grottos with limestone structures and the oldest karst formation in Asia, dating back to some 400 million years.

It is also home to Son Doong, which is credited as world’s  biggest cave. In  the cave, tourists will be stunned at varied forms of rocks and colors of stalactites.

As many as 39 grottoes with combined length of 17 kilometers was discovered in Phong Nha-Ke Bang National Park some years ago by a joint team from the British Cave Research Association, Hanoi Natural Sciences University and the park’s administrators, promising more destinations for adventurous tourists to the province to conquer. 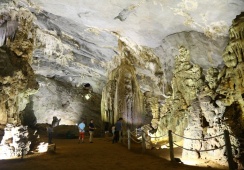 Phong Nha, Hoi An and Ninh Binh are the top three most welcoming cities in Vietnam