The trip serves as an opportunity to strengthen the Vietnam-France strategic partnership.

Vietnam’s Prime Minister Pham Minh Chinh and his entourage began an official visit to France from November 3-5 at the invitation of French Prime Minister Jean Castex.

The visit not only marks Chinh’s first trip to a European country after taking office but more importantly it serves as an opportunity to strengthen the Vietnam-France strategic partnership.

Chinh is scheduled to hold meetings with his counterpart Jean Castex, French President Emmanuel Macron, President of the French Senate Gerard Larcher, and Chairman of the National Assembly Richard Ferrand.

The Vietnam-France strategic partnership has enjoyed great momentum as leaders from both countries share the same interest in the necessity of boosting bilateral relations.

The France-based La Tribune reported during Prime Minister Chinh’s visit, both sides would sign a series of agreements in fields of healthcare, aerospace, infrastructure, renewables, and hi-tech that would benefit major French corporations such as Airbus, Thales, EDF, Total or Air Liquide that are having long-term commitments in Vietnam.

At present, around 300 French companies are doing business in Vietnam in the fields of infrastructure, environment, distribution, industry services, and healthcare.

In addition to economic cooperation, Vietnam and France also extended the partnership to military, culture, and education. Visits of  French presidents Jacques Chirac in 1997 on the occasion of the Francophone Summit in Hanoi, Francois Hollande in 2016, and Prime Minister Edouard Philippe in 2019 are evident for such a strong partnership.

So far, both countries have signed key legal documents as the foundation for bilateral relations, such as the legal framework for economic cooperation, agreement on investment protection, and agreement on double taxation avoidance, while forming strong cooperation at international and regional forums including the UN, Asia-Europe Meeting (ASEM), and the International Organization of La Francophonie (OIF). 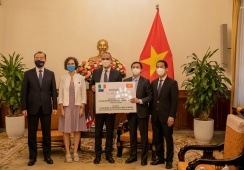 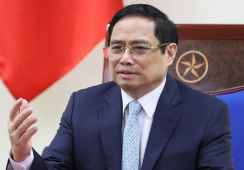 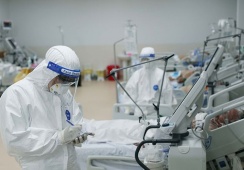