Muoi Sau (Sixteen) Dessert Soup Stall in Hanoi’s downtown is a well-known place for those who love the sweetness of Hanoi desserts.

Che or sweet soup is a Vietnamese dessert that originated in northern Vietnam a nearly century ago. This has long been a familiar nosh of Hanoians to cool off on hot summer afternoons. From the simple sweet porridge cooked from lotus, black or green mung beans, over time, it has become more diverse with different variants.

A specialty of Hanoi

Interestingly, you can enjoy che in both Summer and Winter. There is no better way to refresh your body in the middle of a hot summer day than having a cool fresh glass of che, and warm your body up with a hot bowl of Vietnamese sweet soup on a freezing winter night. che may be served hot or cold, in bowls, glasses, or over ice.

Unlike che from other provinces, Hanoians are very careful in the selection of ingredients, preparation, and even the ways to eat. Cereals, green peas, and sticky rice are the main components. Sometimes sweet soup is eaten with rice, so its rice-soup or xoi che ingredients are well-selected and processed, from the peas, sesame, and ginger to oil-species of banana, pomelo, or jasmine.

It is said that eating Vietnamese sweet soups is an important part of local life in Hanoi. Local people love to eat sweet soups not in luxury restaurants but at street food stalls on pavements, in back alleys, and at local markets.

The fame of an old sweet-soup stall

One of the best stalls serving these special noshes is the Che Muoi Sau or ‘Sixteen’ Dessert Soup Stall in Hanoi’s downtown.

According to the owner Pham Xuan Thanh, the shop is nearly 70 years old, having been opened with the recipes of his mother-in-law, Nguyen Thi Nghia Loc, a woman originally from Hanoi.

Muoi Sau Dessert Soup Stall offers very unique flavors: sweet but mild and unmistakable. In front of the shop, there is often a queue of people waiting patiently for their turn. Many of them don’t know why when they think of dessert soups, especially those of Hanoi, Loc’s stall will come to mind, so they intuitively go there to eat...

Thanh said that “each season has its own food” – his shop serves seasonal desserts according to customers’ preferences, but only the mentioned dishes are popular in every season.

In the winter, Chinese floating rice cakes are added to the menu, with two filling options and served with hot sweet ginger juice. These white balls are considered the “best seller” in the shop.

Every day, the stall can sell up to 800 portions of dessert soups, not to mention other dishes. The special thing is, the prices of soups and cakes here have remained almost unchanged since 2007. The cheapest is black bean sweet soup, which costs some thousand Dong or less than one dollar for a portion.

Customers come to Muoi Sau Dessert Soup Stall not only because of the traditional recipes but also because of the way of eating that’s unique to Hanoi.

Thanh shared that, back in the period of the centrally planned economy (1976-1986), Hanoians often chose to eat thick mung bean sweet soup as a nutritional supplement.

Besides, different soups were eaten separately, instead of being mixed together and added with various toppings like today's. Eating mung bean soup was only to enjoy the buttery beans, eating lotus seed soup was to savor the cool thin sauce as well.

The eye-catching soups and cakes here are made with special recipes and are very beneficial to health. He also revealed that in the sugar syrup to cook dessert soups, he often added ginger, as the tuber is very good for health, and could heat up the body on winter days.

For Thanh, the favorite soup that he can eat every day is lotus seed sweet soup, as a lotus is associated with both Hanoi and his childhood working in the stall with his mother. He said he would continue to maintain and pass on the trade, retaining a bit of Hanoi’s quintessential culture for future generations. 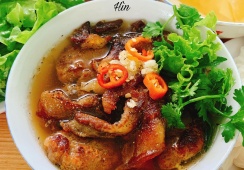 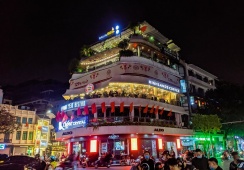