Interestingly, both Vietnamese men's and women’s U23 football teams will face Thailand's in the finals for gold medals.

Vietnam is going to head to head with Thailand in the finals of SEA Games 31 in the next three days after winning Malaysia 1-0 in extra time of the match on May 19.

On the same day, Thailand defeated Indonesia 1-0 in a match consisting of two further 15-minute halves, the same way Vietnam won against Malaysia as both matches ended goalless in 90 minutes.

Tien Linh conducted a header to open the score for Vietnam in the 111th minute from a corner kick made by Captain Hung Dung.

The goal was made after Malaysia was down physically, sometimes resulting in ill-organized defense and fouls when fighting for the ball.

In most of the match, Malaysia chose to preserve defensive tactics without clear passes to shut down the rival’s offense. Vietnam’s Coach Park Hang-seo chose defenders Van Xuan and Van Do to take chances when possible. Meanwhile, Tien Linh lost two clear chances, adding difficulties to the home team in the second half.

Le Van Xuan was hospitalized after the match. It’s not sure if he could be available for the next match or not.

“It’s not this match but every match is difficult. In this game, we had some pressure, but our players tried their best. I want to say thank you to my players and supporters,” Park said in the post-match statement.

When being asked about the rival, he said both Vietnam and Malaysia have good players, and facing each other like this enables both teams to improve themselves and it’s good for ASEAN football as well.

Meanwhile, Malaysia’s U23 Coach Brad Maloney felt sorry that Malaysia could not win tickets to the finals though they "played bravely against Vietnam". He admitted that his players were down physically but said they played their best. “It’s hard to accept defeat this way, but we have to admit that Vietnam is the top seed in the tournament.”

In the other match, Thailand won against Indonesia which played without its Captain Elkan Baggott, the person who influences the team’s spirit and performance. Indonesia possessed the ball for most of the match but wasted their chances to turn them into goals.

Weerathep Pomphan, one of three overage players, scored the goal at 94’ for Thailand. Being deadlocked about the game against Thailand sometimes played mischievously, Shin Tae-yong’s men began to lose control. After a collision at the end of the second extra time that led to a scuffle, Indonesia received three red cards, ending the match with only nine players.

“I don’t think Indonesian lose because they’re tired,” Shin said, adding that both teams played the same number of matches, at the same time. “I think the difference between the two sides in this match is that Thailand showed their full potential, and Indonesia did not. Both had chances, but only Thailand took advantage of it to win,” he noted.

“I am a bit disappointed with the players when receiving too many yellow and red cards. They should not let themselves get such cards as it also means no sportsmanship revealed in the match,” Shin told the media.

Red cards and wounds leave pressure on Indonesia for the bronze-medal game.

In SEA Games 30 in 2019 in the Philippines, Indonesia won silver medals in the final match against Vietnam.

Thailand's Coach Mano Polking said the Thai team was successful in showing their strengths in the match.

In Indonesia vs Thailand match, more than 30,000 fans came to Thien Truong Stadium to cheer for Thailand U23 and Indonesia U23, with a large number of local supporters. Polking commenced the support from local fans, saying it’s a good environment for the development of football. It’s worth an example for other countries, he added.

Earlier, Thien Truong is known for having the largest number of spectators in a match at a neutral venue in SEA Games history.

Meanwhile, the sentiment at Viet Tri Stadium where the home team play is the same as that at Thien Truong. The 20,000-seat stadium was full of supporters in all matches in SEA Games 31 despite rains.

The final matches of men's football will take place on May 22. 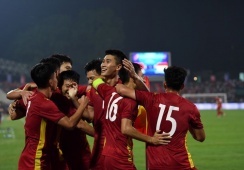