Anti-corruption is a continuous effort that should be carried out with strong determination in all sectors, fields and at all levels of state apparatus and provinces/cities, State President Nguyen Phu Trong has said.

Vietnam would push harder in the fight against corruption in the 2021-25 period.

General Secretary of the Communist Party of Vietnam and State President Nguyen Phu Trong made the statement while chairing a meeting of the Central Steering Committee for Anti-Corruption on March 18, the first session after the conclusion of the 13th National Party Congress in early February.

“Anti-corruption is a continuous effort that should be carried out with strong determination in all sectors, fields and at all levels of state apparatus and provinces/cities,” Trong, who also serves as the head of the Committee, said.

A report from the Central Committee for Internal Affairs informed in the first months of 2021, law enforcement agencies completed the investigation process for six cases with 70 defendants; launched criminal proceedings for five cases and 45 defendants; conducted first instance trial of four cases with 15 defendants and appeal trial of one case with one culprit.

At the meeting, the Committee agreed to soon bring five cases to court, including the offenses  at the Saigon Beer - Alcohol - Beverage Corporation (Sabeco), the Ministry of Industry and Trade and other agencies; Thai Nguyen Iron and Steel Company;  Nhat Cuong company; the Project Management Board of the Danang - Quang Ngai Expressway; and the Drug Administration of Vietnam under the Ministry of Health.

The Committee also set up 22 inspection teams to monitor operation of Party organizations and members overseen by the Central Party Committee, aiming to timely address any wrongdoings and new issues.

State President Trong stressed recent achievements in the fight against corruption is mainly thanks to strong determination and unity within the Party, as well as the support of the public.

Trong also pointed out that slow progress in some cases as a result of the main culprits fleeing abroad or the transfer of embezzled assets out of the country.

In the coming time, Trong suggested the Committee could further expand its function to not only oversee efforts against corruption, but also on waste and other negative acts. 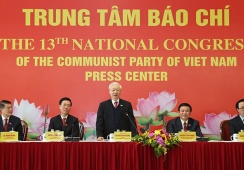