Adolescent orphans will receive financial and medical support until their adulthood.

A supporting program for children orphaned by the Covid-19 pandemic was launched today [Oct 3] in Hanoi to begin a journey accompanying more than 2,000 adolescent orphans until they reach 18.

The program titled “Noi vong tay thuong” was launched by the Ho Chi Minh Communist Youth Union and a number of donors will provide financial support and adoption to the children until they reach adulthood.

Initially, individuals and organizations have pledged to sponsor half of the children.

In addition, the children will get medical care and psychological therapies from the Vietnam Young Physicians Association.

“Orphans due to Covid-19 face their own difficulties, many of them are from poor families. More than ever, they need love and sharing from the community to soon overcome pains,” said Nguyen Ngoc Luong, secretary of the youth union.

Accompanying the program, Truong Gia Binh, chairman of FPT Corporation, one of the largest technology companies in Vietnam, said “We and our great friends want to bring the best for the children.”

Earlier, Binh announced that FPT will raise up to 1,000 Covid-caused orphans with a school that will be built in a model of a military academy that helps them, as cadets, get along with friends and given best conditions for development.

The orphans are the victims of the fresh outbreak that left more than 19,000 deaths in Vietnam with the majority in Ho Chi Minh City, the business hub.

People who wish to support the children can contact the organizers via www.noivongtaythuong.vn.

After Ho Chi Minh City (HCMC) relaxed restrictions on Oct 1, dozens of thousands of people left the city for their hometown nearby the city and in the Mekong Delta, putting pressure on the pandemic fight and likely spreading the virus in the areas.

Facing such a burden, all 13 cities and provinces in the Mekong Delta requested the government to stop the flows of people for two weeks until they are able to accommodate more.

Facing the flows of people leaving HCMC, authorities have convinced them to stay to get vaccinated and assistance. But they refused to stay, saying that it’s better for them to return to their hometown amid the closure of businesses in the largest city.

Commenting on the move, Associate Prof. Nguyen Duc Loc from the Social Life Institute said it’s better for people to return to their hometown in big groups like this to help local authorities manage them and enable them to rest for a while before going back to HCMC with vitality.

Hanoi underwent five days without infections before the cluster was reported on Sept 30. The city now resumes operations of essential services and small gatherings are allowed. 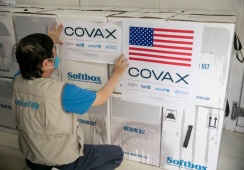 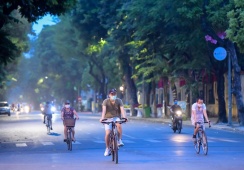