Over time, two-way trade has grown exponentially, and New Zealand exporters now have better market access thanks to the CPTPP and other trade agreements.

New Zealand and Vietnam on November 13 signed agreements on aviation and education while boosting cooperation in other sectors to make the trade target of US$2 billion in 2024 possible.

Discussions on other issues that finally aim to boost trade between the two countries which are members of several trade pacts, demonstrate the main purpose of New Zealand Prime Minister Jacinda Ardern’s four-day visit to Vietnam beginning on November 14.

At the meeting with Vietnam’s Prime Minister Pham Minh Chinh in Hanoi on the first day of the visit, Ardern talked about the potential cooperation and joint efforts to make full use of trade pacts they both are signatories, including the CPTPP.

The visit aims to make it easier for New Zealand businesses to advance in establishing new trade relations.

To emphasize the trade partnership, the two nations have inked agreements for enhanced air service collaboration and an increase in the number of working holiday visas available to Vietnamese citizens.

Ardern is accompanied by high-ranking officials in charge of trade, investment, foreign policies, and several businesses.

On this occasion, Vietnam expects New Zealand to open its door to farm produce from the Southeast Asian country and pledges to facilitate New Zealand investments in education, processing technologies, agro-forestry-fisheries, and maritime cooperation.

To enhance economic ties, the two countries are implementing the Action Plan 2021-2024 for the effective Strategic Partnership.

Since the relations upgraded to Strategic Partnership in July 2020, the two-way trade hit $1.3 billion, up 26.7% on year. In addition, New Zealand is committed to providing $16 million worth of official development assistance (ODA) to Vietnam between July 2021 and June 2024.

To strengthen the Strategic Partnership, the two sides will prepare for the upcoming official visit to New Zealand by NA Chairman Vuong Dinh Hue.

PM Chinh, in his remarks at the meeting with Ardern, emphasized the importance of security of navigation, and overflight in the East Sea, including settling disputes through peaceful means.

For her part, Ardern said those principles are fundamental to both countries, and upholding international law is equally important to Vietnam. “They share the same view that when you see a threat to international law or an undermining of the UN Charter, that’s a threat to peace and stability,” according to Radio New Zealand.

“Vietnam has a very clear eye on maintaining peace in our region. They’ve had an incredibly fraught, conflict-fueled history. You can see why their focus would be on avoiding conflict in our region again because I’ve experienced it firsthand,” Ardern said.

Apart from issues of economic ties, people-to-people links become a central point in bilateral relations. So far, the number of Vietnamese students in New Zealand ranks 4th among countries from the 7th four years ago. 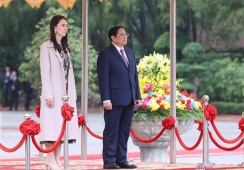