Resilient houses that are designed to withstand both flooding torrents and strong winds are concrete support given by the United Nations Development Program (UNDP) to roughly 26,000 residents in Vietnam’s flood-prone areas.

This emergency assistance is part of the project “Response to Disasters in Vietnam” funded by the United Nations Central Emergency Response Fund (CERF).

In addition, UNDP has supported the construction of 20 new safe houses with full storm- and flood-resilient features in Quang Nam and Quang Ngai, especially those in Ly Son Island, Quang Ngai equipped with more resilient features and powered by solar panels.

The new storm- and flood-resilient houses are based on simple designs to create a stronger structure. Features include a mezzanine level for flooding protection, reinforced roofing, and the use of strong cement. The mezzanine level allows residents to comfortably stay in their houses during a disaster, safe from high flood levels. This level can also be used as an area to store valuables during disasters and avoid it being washed away or spoiled by flooding waters.

The resilient houses have been specifically engineered to include special features such as flood-proof floor that is 1.5m above the highest flood level to provide a safe refuge from rising floodwaters and strongly reinforced roofs that can withstand typhoon-strength winds.

The project becomes more helpful after floods swept some Vietnamese central coastal provinces in last October. The floods have claimed more than 230 lives and destroyed at least 380,000 houses, leaving tens of thousands of residents homeless or severely suffered from damages.

They proved their effectiveness during the severe floods and storms of 2020, when they saved the lives and livelihoods of not only their owners, but in some cases other members of the community as well. Their success garnered attention from the media, and they have since been specifically highlighted by the government as a model for wider replication.

Speaking at the handover of new resilient and repaired houses to local low-income households held on April 29, Tran Van Tan, vice chairman of Quang Nam Provincial Peoples Committee, highly appreciate UNDP’s efforts and timely assistance in building and repairing damaged houses for the poor to help them recover from disasters.

Representing beneficiaries, Luu Thi Phuong living in Que Thuan commune, Que Son district, said “Without this support, I don't know when my sons and I will be able to build such a resilient house.”

“It is an honor and privilege to hand over UNDP supported storm resilient houses to Phuong and other poor women-headed households in Quang Nam,” Ms. Caitlin Wiesen, UNDP Resident Representative in Vietnam said.

She noted that the resilient houses have saved thousands of lives during the historic floods and storms that battered the central region. However, there is still a long way to go to reach all those in need.

Nguyen Van Tien, deputy chief of the Office of the Central Steering Committee for Natural Disaster Prevention and Control, said “I highly appreciate UNDP’s coordination, which goes directly to the essential needs of the people in disaster-affected areas. These activities not only solve problems for immediate post-disaster recovery, but are also sustainable for the communities where disasters occur frequently, such as in central Vietnam.” 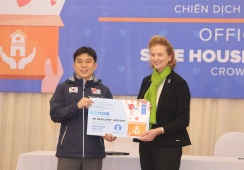