The order aims to keep people safe as the typhoon has been the strongest in Vietnam over the past 20 years.

Danang, Quang Nam, Quang Ngai, Thua Thien-Hue, and Binh Dinh have ordered their residents to stay home as Typhoon Noru made landfall half a day before.

The curfew was made from 10:00 PM Tuesday [September 27] to 6:00 AM the next day as the region faced the super typhoon that was the strongest in the country for two decades, with data have not ever recorded before, according to the National Center for Hydro-meteorological forecasting (NCHMF).

The wind force in the central region has reached 12, the highest warning, or hurricane, on the Beaufort scale, with a speed of 118-133kph and about 100km far from the offshore.

Areas surrounding the eye (around 50km in diameter) faced a force of 14. Local media cited Tran Quang Nang from NCHMF, who described the period as “very dangerous.”

As the typhoon approaches, the region is in torrential downpours, with rainfall amounts varying from 233mm in Song Bac (Danang), 299mm in Nam Dong (Thua Thien-Hue), and 332mm Ly Son Island (Quang Ngai).

Ahead of the powerful typhoon barreling the central coast, local authorities evacuated more than 800,000 residents.

The busy city of Danang declared that all schools and retail establishments would be closed on September 27 at 8:00 PM till further notice. At 6:00 PM, Quang Nam, which is home to the world’s heritage Hoi An, also announced to impose a curfew, and neighboring communities might follow suit.

Meanwhile, nine airports in the central region were closed on September 27-28. 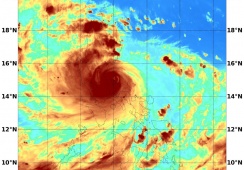 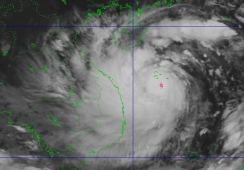