US arms control special envoy comes to Vietnam for 'advice'

The US envoy said many Vietnamese senior officials have long and distinguished careers in the fields of nonproliferation, arms control, and disarmament.

A US presidential special envoy for arms control arrived in Vietnam last week, after visiting two traditional allies Japan and South Korea, for advice in the field and discuss bilateral and regional issues.

Ambassador Marshall Billingslea, Special Presidential Envoy for Arms Control, US Department of State met with Vietnamese officials last week to discuss bilateral relations and regional and international issues of mutual concern at a time when the two countries celebrate 25 years of diplomatic relations, Spokesperson of the Vietnamese Ministry of Foreign Affairs told Hanoitimes at a regular press briefing.

“Many of the senior officials in the Vietnamese government have long and distinguished careers in the fields of nonproliferation, arms control, and disarmament. We have solicited their advice on how to use multilateral mechanisms because this is – when it comes to what the Chinese are doing, this is not simply about great power competition,” Billingslea said in the telephone conference while in Hanoi.

The ambassador highlighted the role of Vietnam as a non-permanent member of the United Nations Security Council and chair of the Association of Southeast Asian Nations (ASEAN), attractions for the US delegation. “And we come away from Vietnam with a number of ideas,” he said.

Vietnamese leaders have opened already to other high-level US visits, arms sales from Western ally India and ports-of-call by the Australian navy, VOA reported.

“We know that the United States has recognized Vietnam’s strategic potential in Asia and that the strategic potential of Vietnam is increasing with the competition between the United States and China, so I should think a lot of discussion would be revolved around the larger balance of power in the region, including the South China Sea,” Alexander Vuving, professor at the Daniel K. Inouye Asia-Pacific Center for Security Studies in Hawaii, told VOA.

US arms control envoys seldom bring up their top agenda item, denuclearization, with smaller countries, Vuving said. Vietnam has missile defense systems but no nukes. It ranks the world’s 22nd most powerful armed forces in the Global Fire Power ranking.

“The significance is that the US sees Vietnam as a player that one can exchange ideas with, that can canvas the region of the ASEAN members but is at the UN as well and that has a relationship with North Korea that many other countries don’t have,” said Carl Thayer, Emeritus Professor at the University of New South Wales in Australia.

Marshall Billingslea said that Washington intends to talk to all nations in the region, friends and allies globally on the importance of not allowing Beijing to destroy the international consensus on nuclear arms control.

“This is about China’s efforts to unravel international norms and unravel the international consensus that has existed to date,” the ambassador noted.

“We will not allow China to menace the United States, our Navy, or our ground forces, nor will we allow them to intimidate our friends and our allies with these massive numbers of missiles that they are building,” Billingslea said in response to a question raised by a Vietnamese reporter.

He affirmed that Washington is focusing its efforts obviously, first and foremost, on diplomacy and arms control.

He mentioned the consensus that has allowed the US and the Soviet Union -- and then the US and Russia -- to make deep cuts in their nuclear forces. "Unfortunately, the Chinese buildup now calls into question the entire consensus that surrounds the arms control process."

He went on to say the US is in the process of modernizing its capabilities with determination and restraint.

The US has also highlighted for all of its allies the additional capabilities that have now become an imperative, given what China is doing. And by this, it is the kinds of capabilities that they now pursue in the fields of cruise missiles and hypersonic capabilities, robust improvements to their missile defense capabilities, both sea-based and land-based in nature, Billingslea noted. 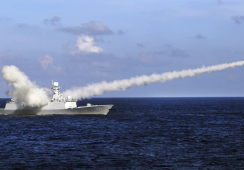