Washington has made concrete steps after it declared crystal clear position on Beijing’s claims over water and seabed rights.

Washington is looking for ways to match words with actions after it made in mid-July significant clarification of prior US positions on Beijing’s maritime claims in the South China Sea, according to an article by Gregory B. Poling, senior fellow for Southeast Asia and director of the Asia Maritime Transparency Initiative (AMTI), and research fellow at the American Enterprise Institute Zack Cooper.

Earlier this week, the US government for the first time blacklisted 24 Chinese companies for their involvement in the advancement of China’s reclamation in the sea where more than US$5 trillion worth of trade passes through annually.

The US Department of Commerce placed 24 Chinese companies on the Entity List, through which, individuals and firms will be subject to export restrictions of certain goods that are believed to threaten US national security or foreign policy priorities.

In the week, the Department of State said it will begin imposing visa restrictions on Chinese individuals responsible for, or complicit in, either the large-scale reclamation, construction, or militarization of disputed outposts in the South China Sea, or China’s “use of coercion against Southeast Asian claimants to inhibit their access to offshore resources.”

According to AMTI under the Center for Strategic & International Studies (CSIS), Secretary of State Mike Pompeo linked both policies to his July announcement that the US would now treat most of Beijing’s maritime claims and many of its actions in the South China Sea as illegal.

A day after the US crystal clear position was announced, Assistant Secretary of State David Stilwell spoke at the annual CSIS South China Sea Conference that “Everything is on the table” when asked whether the administration would impose sanctions on Chinese entities engaged in illegal behavior at sea.

Since then, partners in Southeast Asia and beyond have been waiting to see concrete follow-through, according to the think tank.

AMTI said these new restrictions show that the administration is looking for ways to match words with actions. However, the think tank said the new export and visa restrictions could be just a first step. Additional sanctions might be coming on China Communications Construction Co, Ltd. (CCCC) and associated entities.

The US is right to use economic tools to impose cost and incentivize changes in Beijing’s behavior, and that of its state-owned enterprises and private companies.

But sanctions are most effective when aimed at specific and ongoing illicit activity. In the South China Sea, this means going after China’s illegal fishing, maritime militia, and hydrocarbon surveyors. Those are the actors who are actively harassing Southeast Asian nations, stealing their resources, and infringing on their rights.

Washington should make clear that future malign activity, such as illegal oil and gas drilling or new military construction, would bring new sanctions, the authors said. 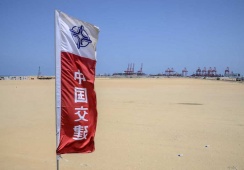 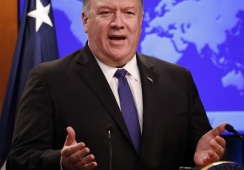