The plant will help manage waste treatment, which has been regarded as a very frustrating problem for local residents.

The Soc Son waste-to-energy plant, the largest of its kind in Vietnam at the moment, was officially put into operation and plugged into the national grid on July 25 after enduring several delays.

Located at the Nam Son Waste Treatment Complex in Hanoi, the plant is capable of burning 4,000 tons of dry waste a day.

Nguyen Thi Hong Van, general director of market development in Southeast Asia for Thien Y Environmental Energy JSC, the project’s main investor, said from now until the end of September, the plant will operate an incinerator with a capacity of handling 800 tons of waste daily.

“The first generator of the Soc Son plant has an output of 15MW. It has a combustion capacity of around 1,000 tons of waste, roughly one-seventh of the amount of trash produced in the capital every day, to generate electricity. The whole plant is expected to generate up to 75MW of electricity per hour. About 20MW of the electricity generated during the combustion process will be used to feed the operation of the plant while about 50MW will be supplied to the national grid,” Van said.

She added that her company is finalizing procedures to complete the second and third phases of four incinerators. It is expected that all five incinerators will be put into operation in the coming months of 2022, raising the total capacity to 5,000 tons of waste per day (treating 60-70% of Hanoi’s total buried waste).

“All technical adjustments for the second generator have been completed and it will also begin operations after getting approval from the authorities. Three combustion chambers have also been successfully calibrated and can operate as soon as they are allowed to. The plant will consume around 15-20% of its output and sell the rest to the state-run Vietnam Electricity corporation,” Van said.

The Soc Son waste-to-energy project was approved by Hanoi’s authorities in late 2017 with a total investment of VND7trillion (nearly US$30 million). The plant is expected to help handle waste treatment in Hanoi, long regarded as a very frustrating problem for residents living near the Nam Son Waste Treatment Complex.

According to the Hanoi Department of Construction, the city currently discharges 6,500-7,000 tons per day, which are mainly processed at two waste treatment complexes in Soc Son District and Son Tay Town. Until now, they were mostly buried or turned into fertilizer, with a very small portion being burnt to produce electricity.

Under the city's master plan for 2030 with a vision for 2050, Hanoi will have 17 waste treatment zones. However, many waste treatment projects have been delayed due to obstacles relating to site clearance.

It is hoped that the Soc Son waste-to-energy project will reduce the pollution, which has for years affected the lives of people in the capital city. 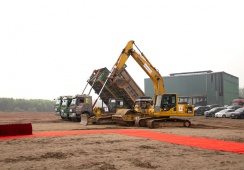 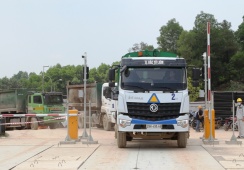 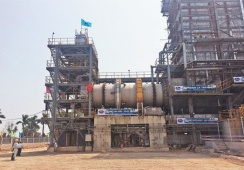