Recent research finds that countries that have diversified into more complex sectors, such as Vietnam and China, are set to experience the fastest growth over the next decade.

Vietnam, China, Uganda, Indonesia, and India are projected to be among the fastest-growing economies by 2030, according to researchers at the Growth Lab at Harvard University.

The Growth Lab researchers, who presented new growth projections in The Atlas of Economic Complexity, released new country rankings of the Economic Complexity Index (ECI), which captures the diversity and sophistication of the productive capabilities embedded in the exports of each country.

The research finds that countries that have diversified their production into more complex sectors, like Vietnam and China, are those that will experience the fastest growth in the coming decade.

Despite the trade disruption of the pandemic, countries’ economic complexity rankings remain remarkably stable. The ECI ranking finds the most complex countries in the world held steady with,  in order, Japan, Switzerland, Germany, South Korea, and Singapore at the top.

Other notable countries include the UK at 10th, the US at 12th, China at 16th, and Italy at 17th. The measure of economic complexity can closely explain differences in country income levels. Among the most complex countries, the greatest improvements in the rankings for the decade ending in 2020 have been made by the Philippines (ECI: 30th), China (16th), and South Korea (4th). Those developing economies that have made the greatest strides in improving their complexity include Vietnam (51st), Cambodia (72nd), Laos (89th), and Ethiopia (97th).

Those countries that show the fastest declines in the complexity rankings in the past decade have become increasingly dependent on commodities or failed to diversify their exports, namely Botswana(111th), Zimbabwe (114th), Ecuador (119th), and Cuba (120th). Among the most complex countries, France (19th) fell the most, having lost six positions in the ranking.

Looking at growth projections to 2030, three growth poles are identified. Several Asian economies already hold the necessary economic complexity to drive the fastest growth over the coming decade, led by China, Cambodia, Vietnam, Indonesia, Malaysia, and India. In East Africa, several economies are expected to experience rapid growth, though driven more by population growth than gains in economic complexity, which include Uganda, Tanzania, and Mozambique.

On a per capita basis, Eastern Europe holds strong growth potential for its continued advances in economic complexity, with Georgia, Lithuania, Belarus, Armenia, Latvia, Bosnia, Romania, and Albania all ranking in the projected top 15 economies on a per capita basis. Outside these growth poles, the projections also show potential for Egypt to achieve more rapid growth. Other developing regions face more challenging growth prospects by making fewer gains in their economic complexity, including Latin America and the Caribbean, and West Africa.

Ricardo Hausmann, Director of the Growth Lab, professor at the Harvard Kennedy School (HKS), and the leading researcher of The Atlas of Economic Complexity said a stylized fact of the world today is that poor countries produce few things that everyone knows how to produce, while rich countries produce many things including some things few countries know how to produce.

"Growth is being driven by a process of diversification to enter more, and increasingly more complex, production,” he underlined. 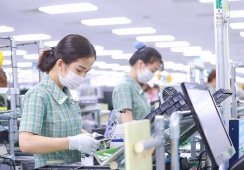 Vietnam expected to be ASEAN’s fastest-growing economy in 2022: ADB