The two patients are the youngest victims in Vietnam so far.

Two women diagnosed with Covid-19, aged 33 and 47, died on August 10, taking Vietnam’s pandemic death toll to 13, according to the Ministry of Health (MoH).

Both patients are residents of Danang, the national outbreak epicenter now, and had suffered several serious pre-existing illnesses.

The first victim, Patient No.430, was a 33-year-old female with late-stage kidney failure, heart failure, sepsis, and hypertension.

She felt fatigue and shortness of breath and was referred to Danang Hospital on July 23. The patient was isolated and sampled for coronavirus testing and the result came positive on July 26.

She was transferred to Hue Central General Hospital in the neighboring province of Thua Thien-Hue on July 30 where she was placed on artificial blood filtration and then on a ventilator.

She was intubated and put on mechanical ventilation on August 1 before getting connected to ECMO, a form of out-side-the-body life support, two days later. Her conditions continued worsening and she died at 0:30 on August 10.

The second fatality was Patient No.737, a 47-year-old woman, also with late-stage kidney failure, heart failure and hypertension.

On July 27, she tested negative for the coronavirus while in quarantine, but a second test on August 4 turned positive. She was transferred to Danang Hospital and then to Hoa Vang district’s medical center on August 6.

She suffered from respiratory failure on August 9 and had to be put on a ventilator. She died at 1:15 on August 10 after having gone into a deep coma.

The two patients are the youngest victims in Vietnam. The country has documented 841 coronavirus infections since January 23 when it registered the first-ever Covid-19 patient, the MoH said.

All of Vietnam’s 13 Covid-19 deaths so far had underlying conditions like kidney failure, heart failure, cancer, and hypertension. Among them, two were below 50 years of age, two above 50, and the rest over 60.

Dr. Le Thanh Phuc, director of Danang Lung Hospital, said that three had negative third test results for coronavirus.
After leaving the hospital, they will be isolated at home for 14 days under the supervision of medical staff.

Patient No.424, aged 55, is living in Ngu Hanh Son district, said she is very happy to be reunited with her family. "I would like to thank the doctors who have worked so hard to look after Covid-19 patients like me," she said.

According to the Danang Department of Health, the city currently treats 242 Covid-19 patients; so far many have tested negative one to four times.

The health ministry has confirmed 847 Covid-19 cases so far, 399 of them have recovered. 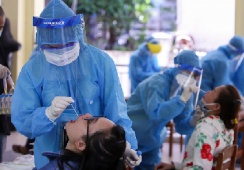 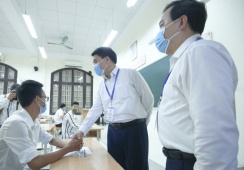 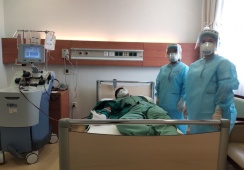