The ambassadors are tasked with building trust and promoting overseas Vietnamese missions.

Vietnam’s President Nguyen Xuan Phuc on Oct 14 handed over the decision to accredit eight ambassadors and heads of the missions to Asia, the Middle East, Africa, and Oceania for the 2021-2024 term.

The ambassadors are tasked with building mutual understanding and trust, promoting firm cooperation with traditional partners in all fields, and bringing about benefits for bilateral and multilateral relations.

They are required to put focal points to the overseas Vietnamese, prioritizing citizen protection, preserving the national values abroad, and mobilizing overseas sources for the country’s development.

The ambassadors are as follows.

3. Dang Xuan Dung will work as Ambassador to the Kingdom of Saudi Arabia, concurrently to the Hashemite Kingdom of Jordan, the Sultanate of Oman, the Kingdom of Bahrain, and the Republic of Yemen.

4. Nguyen Van Trung to be Ambassador to New Zealand, concurrently to the Republic of Fiji, and the Independent State of Samoa.

5. Nguyen Thanh Hai was accredited Ambassador of Vietnam to the Republic of India, concurrently to the Federal Democratic Republic of Nepal, and the Kingdom of Bhutan.

7. Do Son Hai to be Ambassador of Vietnam to the Republic of Turkey. 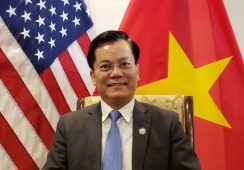