After one year, Job security overtook Health to become No.1 concern of Vietnamese consumers.

Overcoming the first wave of Covid-19, in the second quarter (Q2) of 2020, Vietnam became the second most optimistic country globally with Consumer Confidence Index of 117 points, despite being down 9 points compared to Q1, according the latest report by Nielsen Vietnam for Q2/2020.

In Q2, the Global Consumer Confidence Index fell sharply from a near historic high of 106 in Q1 to 92, indicating pessimistic consumers outnumbered optimistic ones globally for the first time since 2016. A reading below 100 is considered negative.

The 14-point drop is the largest quarterly decline since the index began in Q1 2005 and is twice the largest drop in the index during the global financial crisis in 2008/09, according to the report.

In Q2, 56 out of 68 markets in the survey reported confidence levels under 100, signaling greater pessimism among consumers globally. Ten markets reported levels under 66 (very negative territory). This implies that almost all consumers surveyed globally are pessimistic. Despite the plunge in confidence across all Asia-Pacific markets, the region polarized, being home to many of the most optimistic as well as the most pessimistic consumers in the world.

Although there was a sharp decrease from 126 to 117 points compared to the previous quarter, Vietnam still placed among the most optimistic countries globally. As such, Vietnam overcame the Philippines and Indonesia to rank 2nd in the world for having the most positive consumers, after India, whose score was 123.

“Having successfully managed the first wave of the outbreak, Vietnam is on a rebound, however, consumer confidence is weaker overall due to the impact of the pandemic which has impacted many people’s personal situation as well as their outlook of going forward,” said Louise Hawley, managing director of Nielsen Vietnam.

In the quarter, Job security overcame Health to be the top concern of Vietnamese consumers who continued to rank Job security and Health as their top two key concerns.

Work-life balance moved down one spot on the key concern list with less than one in four consumers indicating it as a worry (23% compared to 22% respondents in Q1). 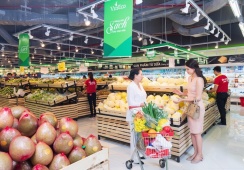