Vietnam’s blockchain market value is expected to reach nearly $2.5 billion by 2026, a five-fold surge from 2021.

The Vietnam Blockchain Summit 2022, opened in Hanoi on October 19, is expected to create technology-related connections, contributing to the promotion of Vietnam’s digital economy in the upcoming time.

The event will showcase Blockchain's special features and gather appropriate proposals on Government policies to support domestic and international organizations in developing blockchain business models in Vietnam, according to the Vietnam Blockchain Association and the Vietnam IT Software and Services Association (Vinasa) at the opening ceremony of the two-day event.

Vinasa Founding Board Chairman Truong Gia Binh said: "Blockchain is creating breakthroughs in many industries," adding that as Vietnam is undergoing a comprehensive national digital transformation, new technologies, including blockchain, a game changer to spur growth, are always of interest to local leaders at all levels.

A Grand View Research’s report shows that the global blockchain technology market size was valued at US$5.92 billion in 2021 and is expected to grow at a compound annual growth rate (CAGR) of 85.9% from 2022 to 2030.

According to MarketsandMarkets, Vietnam’s blockchain market value is expected to reach nearly $2.5 billion by 2026, a five-fold surge from 2021. Seven of the world’s top 200 blockchain-based companies are built by Vietnamese.

Vietnam is also one of the top five-leading blockchain nations. Ten Vietnamese blockchain startups are valued at more than $100 million.

According to Vice Chairman of the Vietnam Blockchain Association Phan Duc Trung, while traditional databases only track records for single entities, blockchain connects a group of entities and allows data to be synchronized between many independent stakeholders.

“That’s why blockchain is opening up new applications in the global economy,” he said.

The event draws the participation of more than 1,000 people, including 50 speakers and nearly 150 business executives and officials from 30 leading economies in the global blockchain industry. They will speak on related topics in almost 20-panel discussions and talks.

It will also welcome the attendance of leading blockchain companies in Vietnam and the world, such as FTX, OKChain, BNBChain, FioProtocol, Sky Mavis, FPT and LaunchZone.

Attendees will also have the opportunity to learn about experiences in the development, integration and programming of solutions and join training workshops on the development of blockchain technologies given by international companies. 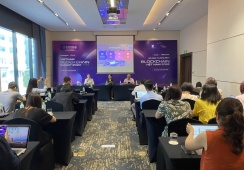