With a long coastal line of 3,200 kilometers and an average East Sea wind speed at 6m/s and height of 65m, Vietnam has huge potential for wind energy development.

Vietnam gives high priority to developing the local energy sector in a sustainable way to ensure national energy security and reduce greenhouse gas emissions, and the cooperation between Vietnamese and German firms is a major step towards that direction.

Vietnamese Ambassador to Germany Nguyen Minh Vu made the statement while addressing a meeting between Germany-based energy-sector engineering group GICON and the Vietnam Petroleum Institute (VPI) on August 4.

The meeting was aimed at realizing the memorandum of understanding (MoU) signed between the two sides on March 29 to establish collaboration on renewables and hydrogen production in Vietnam.

According to Vu, renewables accounted for 11.4% of total electricity produced in Vietnam for the first six months of this year, noting the rate is on the upward trend.

“Vietnam has been successful in developing solar power energy projects with a combined capacity of nearly 6,000 MW, mainly concentrated in the south-central region,” Vu said.

In terms of wind energy, the country is home to nine wind farms with a total capacity of 304.6MW, with the largest one located in the southern Bac Lieu Province at 100MW.

The Vietnamese Ambassador expected the agreement between GICON and VPI would further strengthen the two countries cooperation in this field and tap into Vietnam’s huge potential in solar and wind power, especially in offshore wind energy.

“This would contribute to improve Vietnam’s environment and cope with climate change consequences, as well as to enhance two countries’ cooperation in economy, trade, and investment,” Vu added.

At the meeting, GICON President Jochen Grossman said with a long coastal line of 3,200 kilometers and the average East Sea wind speed at 6m/s and elevation above sea level of 65m, Vietnam has huge potential for wind energy development.

With VPI as a key partner, Grossman expected GICON to further contribute to Vietnam’s wind energy development and increase its contribution to the total energy output.

Over the past 10 years, cooperation in renewables has been a priority in Vietnam-Germany relations with Germany being one of the largest investors in this field in Vietnam. IFC provides US$57 million for wind projects in Vietnam 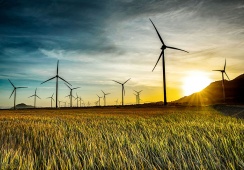 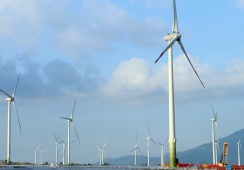