Vietnam objects to any attacks on civilians that violate human rights and humanitarian laws while calling for the verification of recent information transparently and objectively with the involvement of concerned parties.

Vietnam calls for a cease-fire and de-escalation of the Russia-Ukraine conflict, for which both parties should resume negotiation for long-term resolutions on differences.

Permanent Representative of Vietnam to the UN Dang Hoang Giang gave the remarks at a UN voting session on the exclusion of Russia from the UN Human Rights Council on April 7, reported Vietnam News Agency.

According to Giang, Vietnam reaffirms its stance on resolving international disputes via peaceful means based on the UN Charter and international laws, especially in respecting the independence and sovereignty of countries.

Giang stressed the importance of countries not to interfere in the internal affairs of others, as well as to refrain from using forces in international relations.

The Vietnamese Ambassador also expressed his concern over the impacts of the conflict on the people, and the high number of civilian casualties reported in the past days.

He noted Vietnam objects to any attacks on civilians that violate human rights and humanitarian laws while calling for the verification of recent information transparently and objectively with the involvement of relevant parties.

Giang expects any decision from international organizations should be taken in compliance with their procedures. In this regard, the UN Assembly General’s decision must be based on verified and transparent information.

The UN and international community should continue encouraging and creating favorable conditions for dialogues and negotiation between concerned parties to seek peaceful and comprehensive solutions, he added.

During the discussion, many countries have voiced their concern over the situation in Ukraine and stressed the importance of compliance with international laws.

Many countries, including those voting against and abstentions, said given the ongoing investigation on the human rights issue in Ukraine, a proposal on the resolution of removing Russia from the human rights council is hasty.

The approval of the resolution, therefore, may cause negative impacts on the negotiation process between parties, as well as division among the members, and undermine the credibility of the UN. 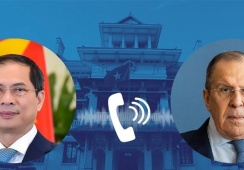