Tensions in the South China Sea remain as Beijing shows coercion in the sea over the past years.

Vietnam and China on Friday [November 29] agreed to maintain dialogue and take steps towards peacefully resolving the South China Sea issues which heated up over the past months after Chinese ships entered Vietnam’s territorial waters.

Trung and Chinese Vice-Foreign Minister Le Yucheng held talks in Beijing where they agreed to “resolve conflicts in an appropriate and peaceful manner”, according to a press release by the Vietnam’s Ministry of Foreign Affairs.

“The two sides agreed to maintain mechanisms to discuss sea-related issues and to cooperate with each other in organizing activities to celebrate the 70th anniversary of bilateral diplomatic relations next year,” said the statement.

Beijing claims almost all of the South China Sea and has built artificial islands with military-capable facilities over reefs and outcrops in a number of Vietnamese islands.

China occupied Vietnam’s Hoang Sa (Paracel) Islands in 1974 and Truong Sa (Spratly) Islands in 1988. Over the past years, oil and gas exploration in the South China Sea is a highly fraught issue in both China and Vietnam as Beijing bullies Vietnam’s longstanding oil operations.

In 2014, anti-Chinese sentiment boiled over in Vietnam and sparked deadly attacks against Chinese-owned factories and businesses after a Chinese drilling rig entered the disputed waters. 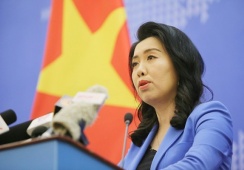 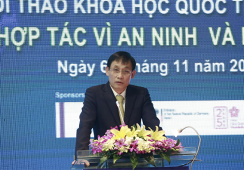