The repatriation gives priority to children under 18, the elderly, the sick, and people of special cases.

Vietnam Airlines, the national flag carrier, has been repatriating thousands of citizens and taking foreigners back to their home countries amid the global lockdown.

The repatriation of Vietnamese nationals gives priority to children under 18, the elderly, the sick, students having no dormitories, and those of special cases. It must ensure the safety requirements of related parties and meeting Vietnam’s mass quarantine capacity.

So far, Vietnam Airlines has conducted a number of flights to repatriate Vietnamese citizens from European countries, Canada, the UK, Japan, Indonesia, Singapore, among others, the Vietnamese Ministry of Foreign Affairs has informed.

On May 5-6, Vietnam Airlines brought back 240 Vietnamese people from Paris to Van Don airport in Quang Ninh province, including children under 14. On the Hanoi-Paris flight, it flew nearly 200 French nationals and carried on board medical supplies that the government of Vietnam donated to French people.

On May 3, Vietnam Airlines VN88 flight brought nearly 300 Vietnamese citizens back to the country from Dubai, the United Arab Emirates. This is the first repatriation flight from the Middle East.

As Dubai is not a regular destination of Vietnam Airlines, the airlines needed to bring technicians and ground staff to work at Dubai airport.

On May 1, nearly 300 Vietnamese citizens were repatriated on flight VN08 by Vietnam Airlines. On way to Canada, the airlines brought back a number of Canadians.

A group of 30 crewmember served the return flight of nearly 42 hours.

On April 22, Vietnam Airlines again brought back nearly 300 Vietnamese citizens who are the sick, pregnant women, students and workers of expired residency permits from Japan after having carried Vietnam’s pandemic medical aid to Japanese people.

On April 16, a flight operated by Vietnam Airlines and financed by ENI, an Italian multinational oil and gas company, repatriated more than 50 Italians and carried on board four tons of medical supplies to donate Italian people.

Over the past time, Vietnam Airlines has send aircraft to repatriate foreigners and taken medical aid to five European countries, including Germany, the UK, Laos, and Cambodia. 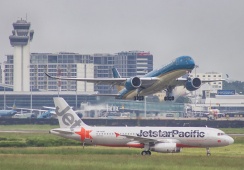 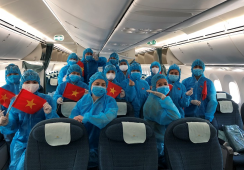