Vietnam has grown bolder in its development aspirations for the United Nations Sustainable Development Goals by 2030.

Vietnam is now one of the most dynamic emerging countries in the region and the world, newly-appointed United Nations Resident Coordinator in Vietnam Pauline Tamesis has said.

Pauline Tamesis shared the view when she presented the Letter of Credentials issued by the UN Secretary-General to Vietnam’s Prime Minister Pham Minh Chinh on July 13.

Tamesis began her term of office in Vietnam in June. She has more than 20 years of experience in international relations, development coordination, and crisis and change management acquired while holding senior leadership positions at the United Nations across multiple regions.

Vietnam emerged as an example of a dynamic and active contributor to the international community and a typical model of cooperation between the United Nations and a developing country, she noted.

According to the World Bank, Vietnam has grown bolder in its development aspirations, aiming to become a high-income country by 2045.

Tamesis congratulated Vietnam on its right Covid-19 response and economic recovery in which no one is left behind while improving the health system and bettering social welfare which matters a lot to the national resilience amid global emerging threats.

She expressed her hope for further cooperation between the UN and the Southeast Asian country, saying that the year 2022 is meaningful for both as it marked 45 years of relations. This year also marks a milestone in the UN Sustainable Development Cooperation Framework for Vietnam for the period 2022-2026.

In talks with Chinh, she affirmed her efforts to coordinate other UN bodies to support Vietnam’s socio-economic development, recovery plans, and the implementation of the UN-Vietnam cooperation goals.

For his part, Chinh reiterated Vietnam’s independent and self-reliant diplomacy attached to diversification and multilateralism with strong support given to the UN's central role in maintaining peace and promoting development on the basis of respecting the UN Charter, international law, and principles of respecting the sovereignty and territorial integrity as well as solving disputes in peaceful manners.

He said Vietnam has been contributing to the UN activities, namely being a non-permanent member of the UN Security Council (UNSC) and deploying more UN peacekeeping missions.

The Vietnamese PM hoped that the UN will continue supporting Vietnam in fulfilling Sustainable Development Goals (SDGs) and cooperation projects.

Commenting on Vietnam’s UNSC membership 2020-2021, Carl Thayer, Emeritus Professor at the University of New South Wales (UNSW), Canberra, said Vietnam approached each conflict independently and stressed the importance of following the UN Charter, international law, and the peaceful resolution of disputes through dialogue.

According to the Vietnamese Ministry of Foreign Affairs, Vietnam’s admission to the UN over the past 45 years has contributed to ensuring its national interests, especially maintaining a peaceful and stable environment for the country’s development. It has enabled Hanoi to deepen international integration and enhance Vietnam’s position and image in the international arena, as well as Vietnam’s relations with other countries, especially key partners. 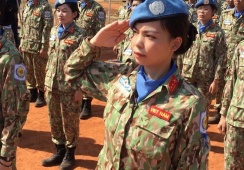 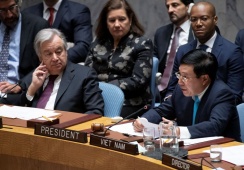 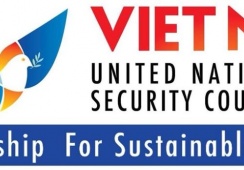