Three of the Vietnamese players of the match today just arrived in Cambodia few hours before the game started.

Vietnam ended up the final group stage match versus Thailand 1-0 at Prince Stadium, Phnom Penh, Cambodia on February 22 to head towards the semifinals of the ASEAN (AFF) U23 Championship.

It’s “a hard-fought 1-0 victory” in the game with a lively start as both teams vie for victory. At the 29th minute, Nguyen Trung Thanh scored a brilliant goal from a set-piece that “proved to be the difference-maker between the two teams,” according to Goal.

After the half-time interval, Vietnam maintained its defensive shape and remained disciplined at the back.

“Vietnamese players fought with determination, plus a little luck, so they won. Thais created a lot of chances but we managed to hold them,” Vietnam’s coach Dinh The Nam said at the post-match press conference.

“I want to congratulate the players. They overcame a very difficult match. We lack many players because of Covid-19 and injuries,” Nam added.

Covid-19 and injuries have left 16 Vietnamese players idle. In the match against Thailand, Nam had to add three players who have been reached Cambodia a few hours before the match. Due to the urgency, the players went to Cambodia by road from Ho Chi Minh City.

“I appreciate the fighting spirit of the additional players. They had to travel a long and hard journey by car. Among them, some played with the team for the first time, so it is not easy to adapt the gameplay,” Nam talked of the difficulties.

After losing to Vietnam, Thailand’s coach Salvador Valero Garcia hopes to meet and beat Vietnam in the finals of the tournament.

“We dominated the game but we just could not score. We fought hard to create the chances. But we just have to keep going. We want to qualify for the final where we hope to play Vietnam again,” according to Garcia’s post-match speech.

Before the decisive match, Garcia claimed to know how to beat Vietnam while Thai striker Teerasak Poeiphimai affirmed to concede Vietnam’s net.

Vietnam brought the U21 team to the AFF U23 Championship to prepare for the 2023 SEA Games which will be hosted in Vietnam. In the first match on February 19, Vietnam made a comfortable win of 7-0 over Singapore.

Thailand ranks the second team with a good record, surpassing Cambodia in Group A in terms of goal difference.

Both Vietnam and Thailand will return to the knockout stage of the tournament on February 24 with Thailand clash against Laos in the first semi-final and Vietnam will meet Timor Leste. 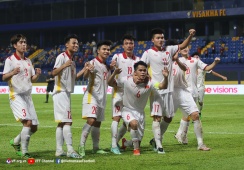 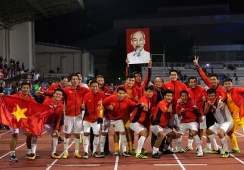 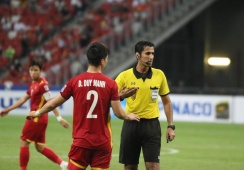